2009 Free Agency: Where the Canucks stand

Share All sharing options for: 2009 Free Agency: Where the Canucks stand

Two days until the summer Christmas and things are bound to pick up quickly. How Vancouver looks now could be pretty damn different in just 72 hours.

After the jump is a cheat sheet for you and, if you're incredibly motivated, I suggest the salary cap calculator for all of your hypothetical GM'ing needs.


Key needs: Where to begin? If the Sedins return, who is this year's Mats Sundin for the second line? And the third line needs a replacement for Pyatt if no one from Manitoba steps up. Alternatively, if the Sedins bolt, they basically need an entire line of offense via free agency, trades or call ups. On the blueline, who replaces Ohlund and who is injury insurance are the biggest concerns. Lastly, does Luongo sign an extension or should we ready ourselves for months of Luongo rumors? Wait, that already happened. In addition, the captain needs a back-up as Sanford is likely out and Labarbera could follow. Including Luongo, both Ryan Kesler and Willie Mitchell are entering their contract years.


Potential targets: The Sedins are the X factor. If they stay, I can see a run at maybe one high end forward like Mike Cammalleri, Brian Gionta, Martin Havlat, Marian Gaborik or Alex Tanguay. Middle range guys like Kyle Calder or Erik Cole could be targeted as well. Cheaper pivot options like Nik Antropov (though not at $5 million per), Manny Malhotra or Samuel Pahlsson could work on the second line at the right price. On defense, you'll hear rumblings about Scott Niedermayer but maybe (hopefully?) a stronger run will be made for Francois Beauchemin, Marc-Andre Bergeron, Paul Mara or maybe Michael Komisarek. Behind Luongo should be Labarbera, but Stephen Valiquette would definitely work too.

Now, if the Sedins leave? I have no idea what management does then but I assume they target everyone under the sun who can stand upright and hold a stick. So that includes you and me. Happy Monday!
What our rivals want: Colorado is looking to inject some respect back into their franchise (and Matt Duchene will be clutch for them there). Ditto Edmonton who needs a new goalie and perhaps another star forward up front. The Wild may lose Gaborik but are rumored to be in the running for a host of other big names including the Sedins. Calgary needs to move more humanity to ink Bouwmeester which, if done before Wednesday, may bring up interesting questions about Dion Phaneuf's future in the city.
Check out Hockey Wilderness, Matchsticks and Gasoline, Copper and Blue and Mile High Hockey for more on the other Northwest squads. 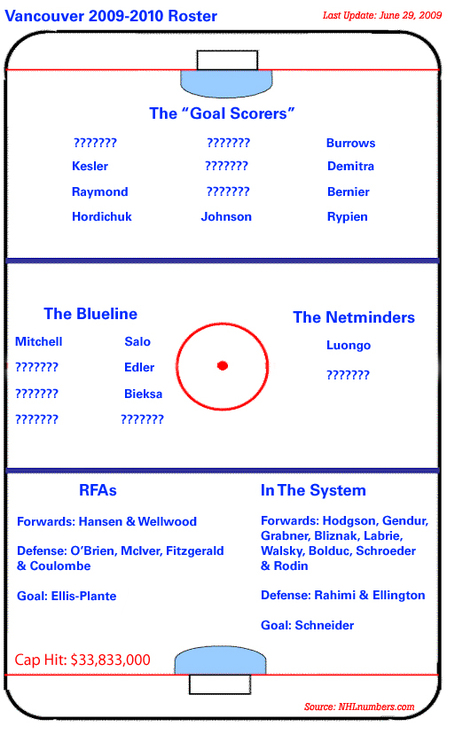