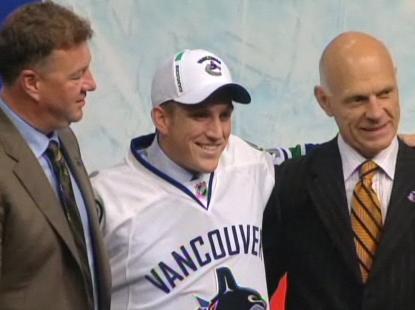 It seemed that defenceman John Moore was going to be available for the Canucks but was snagged at #21 by the Blue Jackets. Who knows if that was Mike Gillis' choice. It seems like Moore was, because Vancouver then took the next best ranked player in the draft. Bob McKenzie called it a steal (TSN had him ranked at #15) and another great pick by Vancouver like Cody Hodgson was last season.

The dynamic young forward from Prior Lake, MN has been one of the nation’s most consistent performers thus far, and he has firmly established himself as a very strong candidate for WCHA Rookie of the Year.

Schroeder was recently selected to represent the United States at the upcoming 2009 IIHF U20 World Junior Championships in Ottawa. He is one seven returning players and is once again the youngest member to be donning the red, white and blue. - Hockey's Future

-An article on Schroeder from a Minnesota paper, Twin Cities. They called it: Schroeder could be passed on because of his size. Doesn't matter. Good on Gillis for taking potentially the best guy available. Players don't have to be giants in the NHL nowadays.

-Much more on Schroeder at Gopher Sports.

-Schroeder and Gillis talk to TSN.