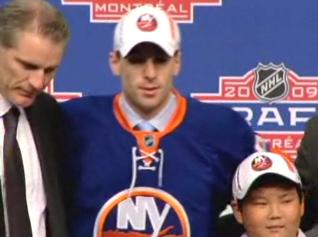 7:05 PM: Gillis tells James Duthie that he is confident he will sign the Sedins AND that he is basically liking how the progress is going with a Luongo extension.

7:02 PM: It looked like the Canucks would get John Moore as a potential steal at #22. But Columbus traded up to pick before Gillis and snagged him. TSN had him ranked at #13. What is Gillis going to do now? Take the next best defenceman?

6:30 PM: Roberto Luongo is sitting at the draft table with Mike Gillis and co. The Province thinks that this indicates that there is a strong possibility that an extension may have been reached. According to a poster at the CDC boards, Nick Kypreos is reporting that his sources are saying that an extension has been reached as well. I may eat crow yet. However, if a deal is in place, it cannot be announced until after July 1st. We'll see...

4:45 PM: Reports out there are saying that Niedermayer has indeed decided to play again next season and that obviously the Ducks will sign him, as they moved Pronger. This may be the big "suck it" to Taylor and Pratt at Team 1040 for starting that Niedermayer to Canucks shiz last month.

4:00 PM: TSN has just said that the Ducks have traded Chris Pronger to the Flyers. Wow. I thought the Quacks would wait until Scott Niedermayer made a decision. Maybe he has. Official: Pronger and Ryan Dingle for Joffrey Lupul, Sbisa and 2 first round picks. Jesus. This means that the Flyers are going to have to flog several players (Briere) to get under the cap this summer).

2:43 PM: JP Barry is not feeling so snug that a deal will get done between the Canucks and the Sedins.

"We've been negotiating for more than a year, so it's hard for me to say I'm optimistic," Barry told Rogers Sportsnet on Friday. "We haven't really made a lot of progress in a year. We're going to have to address the gap that we have - but we've only got five days to do it."

You know Gillis is trying to make them sweat right now. And you have to figure that this is Barry trying to perhaps light a fire under Gillis. 5 more days and by God who knows what is going to happen.

11:26 AM: Pics of the the top ten ranked prospects from today's media lunch have been posted over at Bird Watchers Anonymous.

10:02 AM: All it took was John Buccigross to flap his gums on the Team 1040 yesterday that Roberto Luongo and the Canucks had reached a deal on an extension. It was false. Yet I still see (over lame Twitter feeds) that people think it's true. IT'S NOT f**king TRUE! There have not been many or any talks about it since the Canucks were eliminated from the playoffs. Luongo's agent is in Montreal and Luongo is meeting him there soon. There will not be an announcement after July 1st because there is no deal.

Luongo has made it clear that he will sign with a team that is a contender after this season. In order for him to sign here, he'll wait and see what Mike Gillis does and then play out the season. Don't expect any news of an extension signed until next spring/summer. You can expect a bunch of speculation, anxiety and anger about the issue going forward.

10:00 AM: Scott Niedermayer is having a hard time making up his mind about retiring or not. He still has not given the Ducks' GM an answer, even though he said he'd let Murray know by Draft Day. Clock is ticking, Scotty. Shit or get off the pot.

7:00 AM: Woke up to the news that it was the Bruins who offered that sweet deal to Brian Burke yesterday: Phil Kessel and the Leafs' first pick today for Tomas Kaberle. Isn't that a little much for Kaberle?