Gaborik Buys a House in Vancouver?

Share All sharing options for: Gaborik Buys a House in Vancouver? 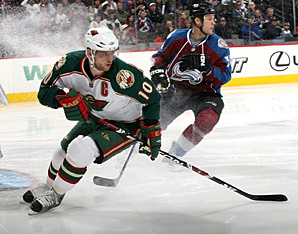 This is Jason Botchford's (The Province) Twitter Page. He is not only claiming the Roberto Luongo is building a house in the Nicola Valley in the beautiful southern interior of BC, but also that Marian Gaborik has bought a house in Vancouver. A few things (regarding Gaborik):

-Maybe Gaborik just likes the scenery in BC.

-Maybe buddy Pavol Demitra sold beautiful BC to him.

-This reminds me a lot of what happened with fellow Slovak Demitra last summer. The big difference is that Demitra expressed his desire to play here publicly.

- If Gillis were to sign Gaborik, I hope I'm not around a gun when I'm drunk in the near future. Could you imagine TWO injury-prone Slovaks on the Canucks? No bloody thanks.

-If Gaborik ever could play 82 games in a season he'd give Ovechkin a run for his money.

-I'm not assuming anything at this point, I mean, it's just a house, right? RIGHT?