And with the 22nd pick, the Canucks select...

Share All sharing options for: And with the 22nd pick, the Canucks select... 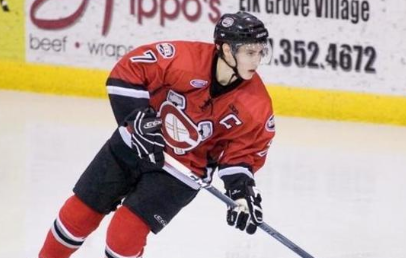 The ongoing mock draft over in From The Rink land has allowed each team's bloggy heads to select the guy they'd like to see their team take in the first round. A few days ago we asked you what your opinion was but, as you know, it's a lot harder to guess in the latter parts of the first round since guys are being passed on left and right.

I doubt Vancouver would get this pick unless he drops pretty far (and historically Vancouver tends to pick Canadians or Swedes and hometown boy Stefan Elliot is more NHL ready and slated to go in the low 20's), but let's dream the impossible dream: "With the 22nd overall selection, the Vancouver Canucks select defenseman John Moore of the Chicago Steel in the USHL."

The USHL Defenseman of the Year is precisely what the Canucks do not have: a blindingly fast offensive-minded defenseman with a potent shot and leadership skills to boot.

The Canucks defensive prospects are damn near bone dry. Luc Bourdon, unfortunately, was the Canucks best defensive prospect and, scanning their list now, it's not exactly encouraging. McIver can maybe make the jump in a bottom four role, but Sauve still has a few more years of development and the jury is out on what impact (if any) will come from Ellington, Rahimi, Fitzgerald and Coulombe.

Moore could go a long way to filling this gap and is a steal at 22nd (with many current rankings having him slated to go anywhere between the 10-15 picks). He finished fourth overall in scoring by a USHL defensemen with 39 points (14-25-39) in 57 games this past season. He also finished second among USHL blueliners with 12 goals and ranked in the top 10 in power-play goals (5), power-play assists (10) and game-winning goals (3).

He was named the USHL Defenseman of the Year and is the highest ranked USHL player in the draft according to Central Scouting. Moore also has a gold medal with Team USA from the 2008 World Junior ‘A’ Challenge and added two assists in his first taste of overseas play. And if Gills is looking for character and leadership, then Moore has that as well, being the captain of the Steel after their previous captain (Mike Walsh) had a season-ending injury and described by his coach as "unbelievable leader."

Scouting reports describe him Moore as having exceptional puck handling abilities and a bomb of a shot from the point. His chief strength is his speed where he's reportedly skating at a higher level than most in his peer class. He's compared from potentially being a better overall Jordan Leopold to a Scott Niedermayer, Jay Bouwmeester or Mike Green-type player.

"His first two strides are like Paul Coffey and he has been labeled as a world-class skater. He is poised with the puck, he gets his shots through to the net and he has gotten a lot stronger this season.
- Jack Barzee, NHL Central Scouting

"Tremendous physical tools with excellent size, outstanding mobility and terrific speed. Superb natural athleticism. will use the body but has to play with more of an edge on a regular basis. Loves to work himself into position for a lethal 1-timer."
- Red Line Report 2009 Draft Guide

"He has the size and skill to go along with great playmaking abilities. Tremendous skater."
- International Scouting Services 2009 NHL Draft Guide

"It's frightening. It's exciting just to watch him skate."
- A scout, quoted in The Hockey News 2009 NHL Draft Guide

There is some risk taking Moore obviously. He's not close to competing at the NHL level yet. He still needs to work on his defensive game (not precisely a ringing endorsement for a blueliner) and, at 6'2'', has been knocked for playing a too soft. If Moore can't elevate his game against tougher opposition in the NCAA or OHL, there's a chance he could inevitably turn into a Patrick White-type prospect. Or he could become, coincidentally, a lot like Ed Jovanovski which is a mixed blessing in and of itself.

However, his upside can't be denied. And if he develops into the type of player the scouts see, he'll join Schneider and Hodgson as the defacto leaders of the next generation of Vancouver Canucks.

- Fellow SBN'er Die By The Blade has their take