This is nearly a must-win for Manitoba, as games 3, 4 and 5 will all be played in Hershey. Lame format.

The Moose talked after game 1 about what they need to change. Not blowing a 3-1 lead would be a great start. Gad, it runs in the Canucks family doesn't it?

I'll recap every period as per usual.

Bah! I worked late and missed the majority of the 1st period. I did hear the guys say that the Moose gave up 2 breakaways at one point in the period and the usual suspect, Alexandre Giroux made the Moose pay. 1-0 Bears after 1.

The Bears were all over the Moose to start the 2nd, to the point of the fans booing the home team. But when they got a powerplay they finally applied pressure, and Jason Jaffray tied the game 1-1, with assists going to Michael Grabner and Nolan Baumgartner.

What a difference that goal made for the Moose. They stole all of the momentum after that, outshooting the Bears 14-4 in the second, but were halted by the great goaltending of Bears' goalie Michael Neuvirth. The Moose are on fire, but we'll see if they can bag the winner on Neuvirth in the 3rd.

The 3rd period was played a lot more tight by both teams, even though towards the end of the 3rd the Bears had got more shots through (14-7 advantage) but nothing too serious. With 47 seconds left in the 3rd, and OT seeming inevitable, Jason Jaffray barrells down the left side and wires a shot past Neuvirth. 2-1 Moose!

The Bears are forced to pull their goalie but seconds later Jaffray scores into the open net. A hatty for Jaffray! Beauty. Series tied 1-1. Great to see one of my faves in Jaffray have a game like that. 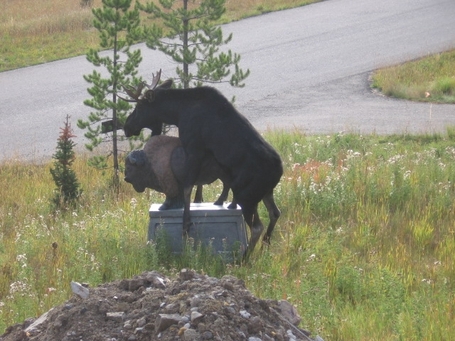