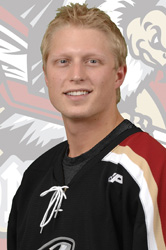 With a week before the NHL Entry Draft, Gillis is busy stocking the farm as best he can. Yesterday he inked Langley product Matt Pope to a two way deal.

"There were a few teams interested, but the Canucks, I was hoping they were going to make me a good offer," Pope said by phone as he was on his way to Los Angeles.

Pope played four seasons at Bemidji State University in Minnesota (the College Hockey America Conference) and ranks 10th in BSU Division I history with 71 career points and ranks 9th with 33 career goals. Following the end of school, Pope appeared in 54 games last season with the ECHL's Bakersfield Condors where he notched 63 points (30-33-63) and recorded 72 penalty minutes.  Following Bakersfield, Pope played with the AHL's Binghamton Senators where he scored three points (2-1-3) and added four penalty minutes. Following that Pope landed a try out deal with the Moose and played in 12 playoff games with Manitoba, being part of their playoff run and scoring three goals and three assists in the process.

Pope, a right winger, will take part in a Canucks rookie development camp in three weeks and then likely you'll see him in Vancouver's main training camp in September.