Grabner Gunning For A Roster Spot

Share All sharing options for: Grabner Gunning For A Roster Spot 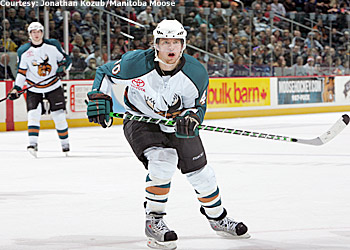 Manitoba's big run towards the Calder Cup is bound to motivate some of the guys to set their sights firmly on making an impact at the NHL level. We know Jaffray is thinking that already, but what about Grabner?

"Right now, I'm just trying to take it easy and give the body some rest. It was a long season," said Grabner. "I'll get back in shape, get ready for training camp and see what happens there. I'll try to get a job there and if not, I'll come back and keep working hard here. It's a great organization and I love playing here too."

Grabner is coming off an AHL season where he scored 30 goals and netted 48 points in 66 games and tacked on 10 goals and 17 points in 20 playoff games. His biggest asset has always been his speed and offensive game,  but what about rounding out and developing the other parts of his game? Canucks assistant general manager Lorne Henning said:

"He's always had the speed, but he's starting to do the little things now...It's been a process, like it is for everybody, but he's opened up a lot of eyes. Guys are anxious to see how he develops in camp. He's put himself in a good position and he's gotten better every year."

So obviously some in management are expecting him to make the jump. Here's hoping because there's more than a few holes to fill up in front. And since it's the summer months and we have oodles of free time: if he does make the jump, where can you see him playing?