Videos, Images and Thoughts On the Penguins' Stanley Cup Parade

Share All sharing options for: Videos, Images and Thoughts On the Penguins' Stanley Cup Parade 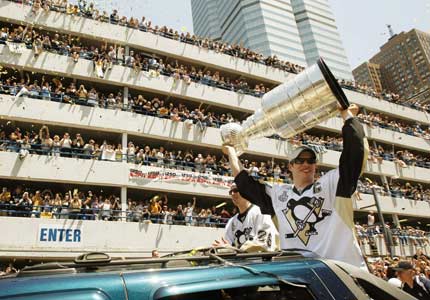 It was quite a sight seeing the Penguins show off the Cup in front of just under 300,000 fans today. Several things came to my mind as I watched the news/fan coverage of it:

-the Penguins are so young, especially the core of the team. Earlier in the parade Jordan Staal and a few other players jumped out of their cars, performed a little mosh pit and then gave a bunch of fans high fives. Youthful energy.

-that energy seemed to rub off on Bill Guerin who was having the time of his life out there, acting like a kid. Great stuff.

- it also got me thinking that about 2 years after Ovechkin (and myself and several others) scoffed at the Penguins giving Crosby the captaincy, little did we know, huh?

-Loved what Malkin said about Guerin at the speech segment, telling the Pens' brass to sign Bill Guerin for another year. Then he was corrected "2 more years!" to which Guerin gave a thumbs up. Hilarious.

-I can't help but think of how that cup would look paraded down the streets of Vancouver. What a f**king blast that would be. Go Gillis go!

-Oh by the way, I'm sick of all this talk about Crosby snubbing Lidstrom at the handshake line. Shut the f*ck up already. Like Lidstrom said today, Crosby was "caught up in the moment" and he will learn from it. At the same time, let the team celebrate. The losers get to sit there crying and watching, waiting for the handshake. Tough luck. It all just stinks of Detroit being sore losers.

Here are some of the best video links to the parade in case you cared to watch it.

-March of the Penguins (TSN)

-Crosby and Malkin's parents drink from the Cup. (TSN) Use Vodka next time!