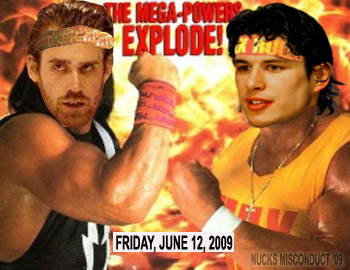 Perfect timing for a Game 7 of the Stanley Cup Finals to happen: a Friday night. Nothing would make me happier than to have a buzz from Captain Morgan's Spiced Rum and Coke but more importantly to hopefully NOT see Crosby or Lemieux come anywhere near Lord Stanley.

I am appreciating this finals so much more than last year not only because it's going 7 games, but also because the refs are letting the teams duke it out (hope it stays that way for game 7), and also because of how often this series goes back and forth.

History favors Detroit in this scenario. Home ice in game 7's is a crucial advantage. 14 Cup Finals have gone 7 games and only TWO road teams have won game 7. The away team has not won since Montreal beat Chicago in 1971. On top of that, obviously, the home team has won every game in this series. How is Pittsburgh going to match Detroit's intensity at the raucous Joe Louis Arena? Answer: Score first. It's as simple as that. Seize the momentum, silence the crowd. Oh, by the way, the Wings have an 11-1 home record in these playoffs.

This is going to be a beauty. I hope it goes to overtime.

Some links about Friday's game 7:

-In the 8 games the Pens have lost in these playoffs, the opposing team has scored 3 or more goals.

-Petr Sykora will probably miss game 7 with a foot injury after blocking a shot in game 6. Big deal. He only has 1 assist in 7 playoff games this postseason.

-Marian Hossa is feeling the pressure against his former team. No goals and 3 assists in the Finals. It seems to me like most of his shots are from far out. He's not getting to the dirty areas to score.

-Great video on "Disco" Dan Bylsma's passion for the game.

-Crosby is so superstitious that it's almost pathetic. But hey, whatever works for an individual.

TSN has a poll up on who fans think will win the Cup. So far the results are as follows: 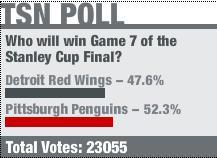 PS: The Moose play the Bears at 5:30 PST Friday as well. Kind of hard to follow both! I'll update the Moose game in the comments section as that game goes along as well. Hopefully the Moose push it to 7 games so we can focus on that more closely.