On This Day In Canucks History: June 10

Share All sharing options for: On This Day In Canucks History: June 10 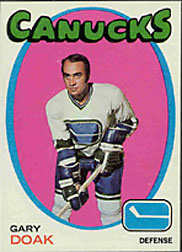 Doak had a pretty simple, if unspectacular career up until Vancouver made him the first Canuck:

Doak's biggest career break came when he was claimed by the expansion Vancouver Canucks in 1970. Plenty of ice time coupled with fewer injuries allowed him to excel as a textbook, stay-at-home blueliner who tattooed impressions of his shoulders and elbows onto any opponents who came within range.

After Doak retired, he was a Boston Bruin's assistant coach from 1981–85 and also coached two years at the University of Massachusetts in Boston as well.