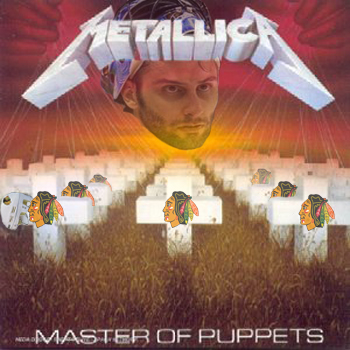 Someone had mentioned that the Canucks are undefeated when I post a Metallica photoshop image on a game thread. Well let's put that to the test, shall we?

Metallica has been my favorite band since 1989. Growing up in a christian home I was sheltered from the secular music scene, especially heavy metal, the devil's music. I went to a christian school from grades 1-8, and switched to the public school for grade 9.

One day I was sitting next to a guy in English 9 class who was wearing a walkman. I could hear the speed of the music coming out of his earphones. I nudged him and asked him what he was listening to. Without saying a word, he took off his earphones and put them over my ears. The song playing was "Blackened" by Metallica.

The rest is history. I fell in love with thrash metal at that moment and never looked back, even though I was told I was going to hell for listening to it. I even bought an electric guitar and have been playing it ever since.

Master of Puppets is regarded as one of the best and most influential thrash albums of all time. I believe Slayer's Reign in Blood is #1. (Guitar World)

Back to the Canucks-Hawks. This game is so crucial. We cannot go back to Chicago down 3-2. Forget about it. Hopefully the Canucks play like they KNOW they can't do that. I can't believe that the Canucks have scored the first goal in every game of this series and have failed so miserably to shut Chicago down in the process. Enough is enough!