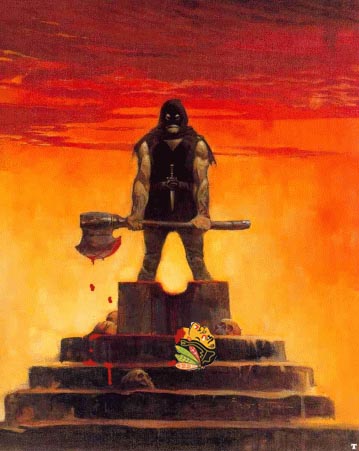 (Tip to Spectr17 for the image)

UPDATE 12:30 PM: Sami Salo took part in a full practice today and is a game time decision. C'mon Sami get back in there!

Now is the time for the Canucks to take over this series. What better place to do that then back at GM Place? There's no point in pondering what might have been in Game 4 anymore, as close as that game was. But the Canucks forwards are being challenged by their coach. "Obviously, we need to have some of our players pick up their game offensively," said Vigneault. "Pick any of our lines, except for Johnson’s line which produced most of our chances."

The players agree. "We have to get in on the forecheck," said Daniel Sedin. "Last game we dumped the puck in but didn't get any forecheck going." Other Canucks talked about playing a full 60 minutes, not sitting on a lead, etc. The team held a closed door meeting on Friday.

Is it getting frustrating yet how the Canucks cannot consistently bury the Hawks?

I wouldn't expect too much changes in the Canucks' style of play. Their defensive style is neutralizing Chicago's speed. They just need to, like Dank said, play more in Chicago's zone and get some more shots off. The Hawks are thinking the same thing. They have proven that they can keep pace with Vancouver no matter what style they play.

Sami Salo is still listed as day to day. There is no word on whether or not he'll play in Game 5.

-The Canucks have released a Luc Bourdon T-shirt for charity. Definitely worth a look.

-What did Alex Burrows say to piss off Nik Khabibulin last game? "I was just trying to get in his kitchen. I asked him how it felt to be on the waiver-wire earlier this year and he didn’t like that," said a laughing Burrows, who was cross-checked by Khabibulin for the remark."

-The Sun has a great piece on Taylor Pyatt's return and all the support the team in giving him. He is playing every shift for Carly.

-A Canucks tribute van stolen and then found? That vehicle is not even that impressive. This one is. So is this one.