But There's No Rest For The Wicked: Game Four Thread

Share All sharing options for: But There's No Rest For The Wicked: Game Four Thread 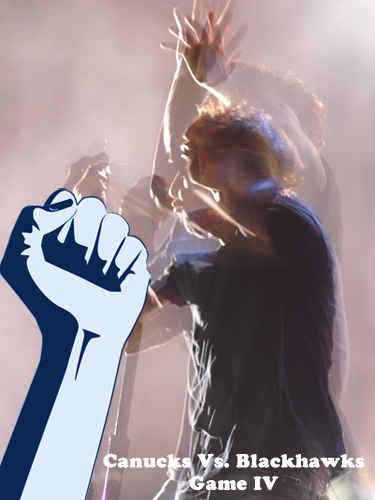 In the first round, we ran with Disturbed for the game four theme (and therein using the best picture we had for our whole fist in the air concept). I said then that I think Disturbed gets trashed a bit too much and so too does Godsmack.

Their later albums I can understand having some choice words for; they are slowly becoming melodically evil, in the same vein as Danzig's satanic Elvis style of sound before them. But their first couple albums are fantastic and their music is influenced, as they admit, from the likes of Slayer and Metallica to Black Sabbath and Alice in Chains. Hell Sully Erna is basically a Layne Staley clone. All very good sources of inspiration.

I found Godsmack pretty much a decade ago when they first broke through the Boston scene. At the time I remember one of their first albums got dinged with the ol' Parental Advisory sticker because of the language. Some numbnuts father in a Walmart heard his son listening to it and freaked (wouldn't you be furious if that was your dad?). Words, as George Carlin said, can't hurt ya.

I believe Dustin Byfuglien is learning that lesson right now too. Despite his best efforts, his trash talking and crease crashing didn't phrase Luongo in game three. Not sure what he'll try tonight. Perhaps lighting himself on fire? I'll provide the matches.

You think this Vancouver crew needs any rest? They seem to be enjoying the fact they have to be at the absolute top of their game to steal another one in enemy territory tonight.

The Hawks should be anything but passive heading into an immense game four for them. They're pissy enough when they're playing from behind, but after being outscored 7-0 in the first 30 minutes of this entire series, I can't imagine their giant f'ing Q behind the bench isn't demanding a D-Day style assault to get the first goal and force Vancouver to catch them. If ever there was truth to the idea of "just survive the first ten minutes" tonight could be it.

For Vancouver, we could have written this story if you gave us the pen. Short-shifting, trap-type games are their bread and butter. Their team strength is something few others can rival. The first goal tonight will be monumental as both teams will probably be shutting down the neutral zone, wanting the other team to take a gamble. But even if Vancouver falls behind, have faith that their (as we called it in the game three thread) "reinvestment" in the defensive coverage should keep them in it until the final whistle.

And their composure? Seems to be better but one idea for tonight would be (and this is just a concept so work with me on it)...no more delay of game calls. Try it. You may like it. In fact, how about no calls all together? Yeah. YEAH.

After game two's laugher Vancouver had to respond with a strong game. That they did. Now it's Chicago's turn. If they can't, Vancouver will drill their hopes against the wall for the remainder of their season. But if the Hawks take game four, it's back to the chalkboard because the final three games will be anyone's guess.

Let's not go there. You tighten the noose around their necks tonight boys and the reward is coming home within spitting distance of the conference finals. Don't give 'em an inch to think, a goal to rally behind or an extra minute in the box. Operation suffocation. For the full sixty.

Here is your thread for game four. Get in there.