Anxiety Destroys Us, But It Drives The Common Man: Canucks & Blackhawks, Game Three

Share All sharing options for: Anxiety Destroys Us, But It Drives The Common Man: Canucks & Blackhawks, Game Three 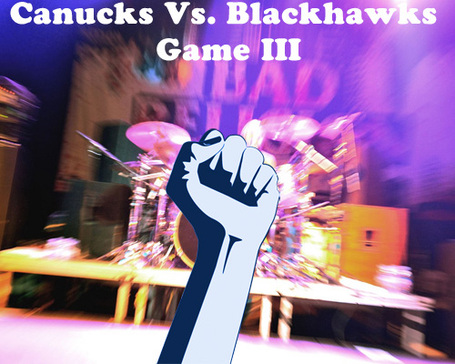 Bad Religion has been around for coming up on 30 years. Considering their sound has more or less been the same for three decades is remarkable. In a day and age when Metallica and Ozzy are pitching me video games while other MTV clones have separate song writing teams, Bad Religion has at least stuck to their story.

I've lost count how many times I've seen them live, but most of their albums you get 10-15 songs, all around 2 minutes. They come at you fast and furious. With guys like Graffin and Gurewitz who write actual meaningful lyrics (gasp!), hell you might even learn something.

But their consistency is laudable: Commonly fast, routinely on message. You can't ask for much more.

On this note of consistency is where we're left wondering what to make of a huge game three tonight (See? There was a point to dropping Bad Religion on ya the whole time).

Since February Vancouver has defined consistent play. Going 23-7-2 wasn't by mistake. It was done by shutting down the other team's best players, being faster and stronger on the puck, getting regular contributions by everyone from Mr. Everything and KesLORD to Bieksa and having Luongo bail them out when trouble came poking around.

And now, in the span of just four periods, it feels gone. And better still, some folks out there in media land are already saying Vancouver is done. Chicago is selling conference final tickets already. So forth and so on...

And lastly I assume you've read Burish's bit on hunting down our defense. Let's ignore the hilarity of everyone crying foul when Burrows mentions a wife in the first round but no one has a problem with this career fourth liner literally saying his sole intent is to hurt someone. If that's the type of team the Hawks want to be known for, so be it. I think their fans deserve something better then that. But, that's just me. After all, this ain't tennis. Boys will be boys.

Ignore Burish; Vancouver has enough humanity to send all the messages it needs. The bigger concern is shall we say a reinvestment in their composure and defensive coverage. No more 5-on-3's. No more lazy hooking calls or delay of game idiocy. This team can't win at the penalty pace they're averaging in just two games. They've helped Chicago crawl back into this series very much by their own mistakes.

And no team is better at milking a one goal lead, so to blow multiple goal leads twice in a row is inexcusable. For one of the top defensive minded team to begin with, their defensive coverage has never been more vital. Mitchell has called out the backchecking component of the game to get involved with extreme prejudice. Can you blame him?

Vaananen will slot in for Salo in what will easily be his biggest game to date in the Vancouver jersey. No time for rust my vowel-happy friend.

It's probable Pyatt will be returning tonight as well which is nothing but good news in so far as inspiring the rest of his team and his style of play being very much needed right now.

New guys, injured guys, slumping guys...ugh. Why bother singling out one guy right now? They ALL need to step up tonight.

The last time the Canucks wandered into Chicago they made a statement in blanking the home team in a rough game. This evening Vancouver needs to assert themselves again. Better yet, return to the consistency that got them this far and they can win not just the game but yank home ice advantage back too. Nothing more, nothing less.

This is your thread for game three. Make us proud.

Zanstorm's note: For all you superstitious people out there... 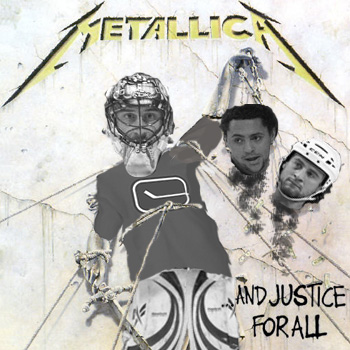