On This Day In Canucks History: May 29

Share All sharing options for: On This Day In Canucks History: May 29 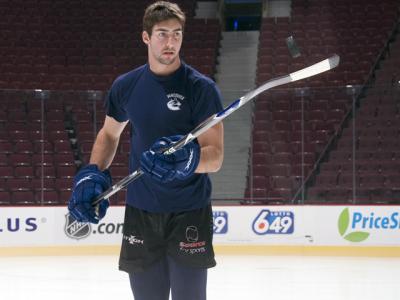 May 29, 2008: Luc Bourdon, Vancouver's first round pick in 2005, is killed in a motorcycle collision near his hometown of Shippagan. It was later determined wind gusts (estimated to have been more than 50 km/31 mph) and Bourdon's inexperience with motorcycles may have been the primary factors in the accident. Bourdon was 21.

The NHL would have a moment of silence for Bourdon before the start of game four of the 2008 Stanley Cup Finals. Pittsburgh Penguins defenseman Kris Letang was shaken up by the news of his good friend's passing. Bourdon's death was particuarly hard felt in Shippagan as well. Bourdon's girlfriend Charlène Ward read a moving poem in front of thousands at his funeral, which included Canucks management, Kris Letang (missing a SCF game the rest of the finals) and several Canuck players.

Bourdon's memory was celebrated in numerous ways this past season. The Lameque/Shippagan Pêcheurs, a senior men's ice hockey team in New Brunswick, all wore a "28 Bourdon" patch on their jerseys over the course of the 2008–09 season. During the 2009 World Junior Ice Hockey Championships, Team Canada players wore LB stickers in their opening game. No Canadian player wore the #6 jersey (Bourdon's number) throughout the tournament.

Both the Canucks and the Moose opened their 2008-09 seasons with tributes to the late defenseman. All Canuck player uniforms were affixed with an "LB" logo on their helmets. Perhaps most impacted was Alex Burrows who attributed much of his breakout season to Bourdon, his former roommate and good friend. In what could have been Burrows most memorable moment to date - the OT goal that ended the first round series against St. Louis - he dedicated it to Bourdon by doing the "bow and arrow" celebration. The Bourdon commemorative t-shirt features the same celebration.