June 1, 2008: Luc Bourdon mourners donate over $7000 to Canucks Place. A touching gesture indeed. This loss hit the Canucks community pretty hard. (See Yankee's post below for a thorough memoir. Bourdon would have been a top 4 defenceman by now, but more importantly he is achingly missed by those who knew him most.

Mike Gillis then vowed to take action on some of the risky activities that players do in their free time. I called it a knee jerk reaction. Kids will be kids. You can't take that from them. Even if you tried, they generally most likely won't listen.

June 11: Trevor Linden officially announces his retirement. A class act right until the end. The above link shows the video of his press conference. Many still thought Linden perhaps had another year in him, but management had reduced his role to the 4th line and poor Trevor was getting squeezed out. Regardless, Trevor knew his time had come. Jeez, so much sad news in so little time. 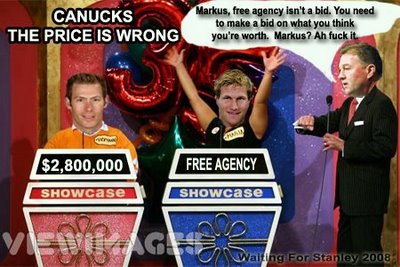 June 12: No talks between the Brendan Morrison and Mike Gillis camps. The inevitable was about to happen. Morrison at the time was still limping from his ACL injury.

"This is another important announcement for our hockey club," he said. "Ryan’s experiences as a player and motivator will be a great asset to our coaching staff. He has proven himself in the game of hockey and business to be successful at everything he does."

Walter was a successful defensive forward in his playing career and had his own business in being a speaker on leadership issues.

Hey Ryan, where was the leadership in the Chicago series?  Just had to throw that in there.

"Money is not most important to me, I prioritize the social part, what type of hockey the team plays and which type of players they have. To play for another club in the same division would feel weird. But we will have to wait and see what happens. As I said before, most important is the social part and that they play a type of hockey that fits me."

This all but confirmed that he did not like Alain Vigneault's system and was on his way out.

So far, all indicators point to Hodgson being a genius pick. The others? Not so sure yet.

Gillis had mentioned that he would have traded Kevin Bieksa at the draft "if the right deal came along."

June 23: Ed Willies wonders if Mike Gillis was being blackballed by other GM's because he used to be a player agent. I think that question was answered in the coming months.

June 25: The day after Kyle Wellwood was put on waivers by the Leafs the Canucks signed him.  I was stoked. Yankee was hesitant and waiting for the money shot, justifiably. Gillis said of the signing:

"We're really pleased, we think he's a guy that we are prepared to put a lot of time and effort into and work with," Canucks GM Mike Gillis told The Canadian Press. "We're quite pleased to have acquired him."

June 27: Yankee points out how many former Canucks were on the UFA list for July 1st, notably the whole West Coast Express line. How the mighty fell.

Next up, July '08 and the free agency madness. Mike Gillis makes even more noise.