On This Day In Canucks History: May 27

Share All sharing options for: On This Day In Canucks History: May 27 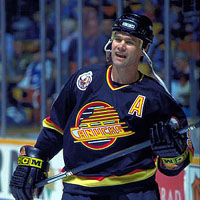 May 27, 1992: Ryan Walter is named the Bud Light/NHL Man-of-the-Year. In the same year he was the Canucks' nominee for the Bill Masterton Trophy and an alternate captain as well. Walter would play two years for Vancouver, ending with 92 games played, nine goals and 11 assists. Sixteen years later Walter would return to the Canucks as an assistant coach.

(If anyone can find out what the hell the criteria was to be Bud Light's man amongst boys, please do share).