A Summer Of Misconduct

Share All sharing options for: A Summer Of Misconduct 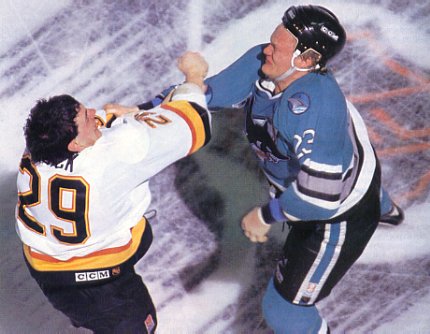 Just a bit of site news for everyone. As you can tell from Zanstorm, we're following the Moose's run towards their first Calder Cup finals and no summer is complete without rampant rumor mongering (good thing we got a head start on it). Also there's the requisite season rewinds that will keep coming at ya.

And that whole NHL draft and start of the free agency thing? Oh yeah, you bet your ass we'll be all over that.

Also, we'll be rolling out profiles of our favorite all-time Canucks starting next week. Feel free to add your own on the left side over there in the fanposts.

In addition, I'll be throwing in a "On This Day In Canuck History" when applicable (h/t to the Mile High Hockey guys who have been doing that all season) as well as posting a weekly "Question and a Query" piece, basically quizzing your Canucks knowledge as well as giving you a chance to Monday morning GM a bit, probably around past draft picks or unwise trades.

So between real news, rumors and everything else in between, stay tuned. Summers suck without hockey but we'll make it a good one anyway damn it all.