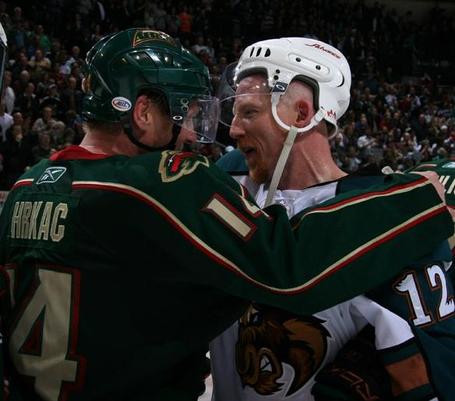 The game had a high tempo start. But it turned into a penaltyfest after a while. The Aeros scored first on a PP goal by Corey Locke, his league-leading 12th goal of the playoffs. It was a result of a misplay between Cory Schneider and a Moose defenceman. Zapped the life out of the building.

Minutes later Matt Pope wired a shot over Matt Climie's shoulder to tie it at 1. The Moose had a glorious chance to go ahead late in the 1st, having a 5 on 3 power play, but the Aeros masterfully killed that.

It is very noticeable that one team is not a whole lot better than the other. Both goalies are generally solid. Having said that, the Moose outshot Houston 13-5 in that period. It didn't seem that one-sided.

The Aeros took several penalties in Period 2 but the Moose could not capitalize. All those PK's did not give Houston any momentum. It was the opposite. The Moose were all over the Aeros but goalie Matt Climie was tremendous.

Cody Hodgson is way more visible out there tonight. He hit 2 posts in the 2nd.

Can the Moose keep the pressure on?

The Moose do keep on the pressure. When the Aeros took their first penalty of the period, it looked like they would kill another one off, but all of a sudden Nolan Baumgartner passes the puck to Michael Grabner at the point...one-timer...SCORES!

Hard for Climie to stop a shot he can't see. Dustin Collins had his ass parked right in front of him.

Minutes later, Cody Hodgson charges into the zone and passes to Mark Fistric at the point. His wrister changes direction on the way in and bingo! 3-1 Moose. Hodgson is playing great tonight, wait I already said that.

That was about it. The Moose had a plan of attack tonight and executed it to near perfection. The Aeros crumpled as the game wore on and Manitoba did not let up.