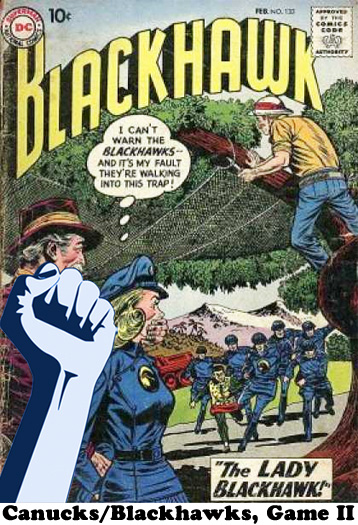 I was impressed with Vancouver's game in the first two periods of game one. So much for the layoff-will-kill-them concept.

Oh but then there's that third period effort to ponder.

The optimist in me would say that Vancouver learned a valuable lesson. That they know Chicago won't roll over and die. Because of that they'll need to play smarter and more composed if they want to send Chicago home two games in the hole.

The pessimist in me thinks that they'll forget all of that with a flurry of sloppy plays and, I don't know, an Hordichuk minor, major and misconduct all on the same play.

(This is why I suck at betting. Hit on a 16? Let me outline the pros and cons and debate the merits of each side. I'm fun at parties like that.)

The Hawks don't have many weaknesses that I can see, but taking advantage of their defensive pairings when Seabrook and Keith aren't on the ice is a good place to start. Chicago is going to tighten up even more so the third and fourth lines (and hell even Sundin) are going to have to battle that much more to earn some puck luck.

And I am still allowed to pick on Sundin: at the moment he and Rypien are the only ones who have a negative plus/minus on this team.

How about this: let Pudge's face define this game. For guy who was picked up on waivers (and put back on waivers in October) and has been called out for everything from being an actual whale to having no work ethic, he's fourth on the team in post season points right now. He had no shots in game one, but drew multiple penalities, bleed all over the bench and finished with two assists and a +2.

If he can leave it all out on the ice to get the win, no one else has any excuses. Do it. Make us proud.

Here is your thread for game two. Jump on in.