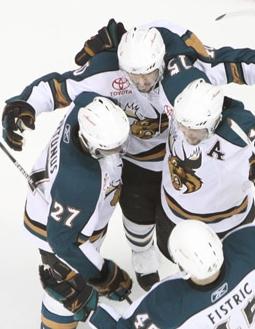 For over half the first period, both teams played a cautious game. When the Moose had a chance to score first on the power play they failed miserably, as did the Aeros with their chance with the man advantage.

Towards the end of the first, Mario Bliznak and Mike Keane charged up the ice on a broken 2 on 1. Bliznak passed the puck about 3 feet off the ice to Keane who batted it out of the air and scored on Nolan Schaefer. Mike Keane is the captain of the team. I believe this guy is 41 years old. He still has the wheels no doubt. Keane wants to play in Manitoba because most of his family lives there. He sure as hell doesn't look out of place.

Cody Hodgson and his line were quite silent that period. The arena in Houston has thousands of empty seats, so it's quiet there as well.

Michael Grabner is a flashy player no doubt, but his defensive game seems quite lacking. The Krog-Grabner-Jaffray line is speedy and generates a lot of chances.

Alexandre Bolduc scored a shorthanded goal 2:33 into the frame to make it 2-0. Unassisted. He now has 5 post season goals. Great speed there from Bolduc.

There wasn't much going on for the Aeros until Matt Beaudoin deflected a Krys Kolanos point shot on the PP with about 7:00 left. Within 2:00 the Moose scored a beauty bing-bang goal: Grabner from Krog and Jaffray. It was a pretty one. 3-1 Moose.

Shots are 13-10 after 2. Only 4-3 shots infavor of the Moose in the middle frame. I didn't hear Hodgson's name at all in that period.

Not even 2:00 into the 3rd Corey Locke spins around and scores on Schneider to make it 3-2. Then the Aeros really started (finally) putting on some pressure, hitting the crossbar moments later. At 13:37, Danny Irmen scores a shorthanded goal for the Aeros to make it 3-3. The Moose' power play is ass I must say. They don't set up much and the defense do nothing to help.

The play by play guys mentioned that Cory Schneider has not allowed 4 goals against in the AHL playoffs.

It was all Aeros in the 3rd until 3:49 left when all of a sudden the top line for the Moose break up the ice and Grabner bags the 4-3 goal. That was killer.