Just Ordered All Of The Remaining Moose Games

Share All sharing options for: Just Ordered All Of The Remaining Moose Games 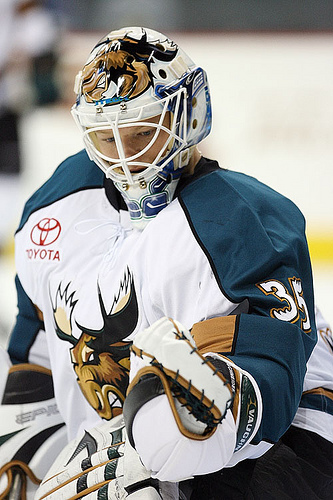 Like I mentioned earlier, there is not much going on with the Canucks right now except pars, birdies, bogies, etc. I figured I'd purchase the AHL TV package and watch the remaining Manitoba Moose games. It costs $8 per game or $40 per series if any of you are interested.

I'll do up post game analysis' from this point on so you know how the farm team is doing.

-The Moose lead the Houston Aeros 2-0 in the semi-finals.

-They have won 9 straight games.

-Michael Grabner has awoken from his playoff slumber, scoring 2 goals in Manitoba's 5-2 win in Game 2.

- Jason Krog has 5 goals and 13 points in 12 games to lead the Moose in playoff scoring.