All Playoffs and No Canucks Makes Zanstorm a.... Hawks Fan

Share All sharing options for: All Playoffs and No Canucks Makes Zanstorm a.... Hawks Fan 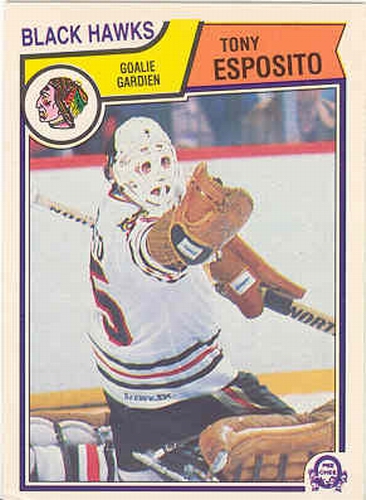 It was when I first saw Tony Esposito's ass-kicking mask (and at the time-his unique goaltending style) as a kid that I clued in to the Hawks. I collected Espo hockey cards, and now even have a framed picture of Tony on my living room wall (thanks Temujin). Denis Savard is one of my all-time faves as well.

I have no shame. I cannot hate the Hawks even though they put Vancouver out. Sure, I hate Ben Eager and Marty Havlat, but that will subside now as they are playing the damned Red Wings. I don't want to see Detroit in the Finals again.

The Leafs have not won the Cup since 1967. The Hawks have not won it since 1961. It's the longest drought running in the NHL. Who was the team they faced in the Finals back then? Gordie Howe and the Red Wings. They made it to the Finals 4 times from 1962 to 1973 and then never made it that far again until 1992, where they lost in 4 straight to the douchebag diving Penguins. I admired so many of the Hawks on that team: Captain Dirk Graham, Steve Larmer, Ed Belfour, Chris Chelios, (no, not Jeremy Roenick), Steve Smith, Bryan Marchment, Murray Craven, Noonan and Matteau, and Brent Sutter. The Hawks swept the Wings earlier in that '92 playoff run. Here is some video footage of the end of Game 4 of that series.

The best game I have ever seen was Game 4 of that Hawks-Pens Final. A hat trick for Dirk Graham, Belfour pulled, and seemingly the coming out party of Dominic Hasek, who stopped 3 Mario Lemieux breakaways in that game. The Hawks lost 6-5. I see someone has put that whole game up on YouTube in about 23 segments. Nice. I still have it on VHS. I've watched it over 10 times.

The last time the Hawks played the Wings in the playoffs was in the 1995 Western Conference Final. Detroit won that series and then got smoked by Neal Broten and the Devils in the Finals.

I see many of the pundits (including a Chicago Tribune writer) are predicting the Wings to win this series, and many are still saying that the Hawks are young and Detroit has the experience. Are they watching the same playoffs as me? So far that argument against the Hawks has been brought before each of their first 2 series'. It is not an issue. These guys are not in this just to gain experience. They believe that they can win it now. I believe it was TSN's Bob McKenzie that said that the Wings will win because they can beat you any way they want to: wide open or tight defence. Well, so can the Hawks.

Chicago has a great blend of youth, speed, skill and physicality. I don't think Detroit is going to be able to keep up. This will be Detroit's toughest challenge in these playoffs by far.

I got the Hawks taking it in 6.

RIVAL BLOGS: Second City Hockey and Winging It In Motown