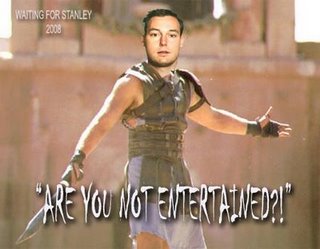 Kyle Wellwood is set to become a restricted free agent this summer, and I hope the Canucks take a long hard look at re-signing this guy. I just wonder how much of a raise he will be looking for, as he was making $998,000 this season. There is no doubt his value has gone up a bit.

What a great story Woody was this season. The Canucks took the guy into their fold, despite his weight/determination issues, and gave him a chance. When he faltered he was put on waivers. Nobody claimed him. When an injury on the Canucks roster occcured (to Demitra of course), Woody was called back up and not claimed on re-entry waivers.

From that point he never looked back. He scored 6 goals and 1 assist in his first 6 games back. Even though his production slowed after that, Wellwood honed his skills as a 2-way player and became a fixture on Line 3, dubbed The Unemployment Line by our friend GZ Expat.

Down the regular season stretch and in the playoffs, Wellwood really showed his newfound checking ability and still showed great offensive talent and creativity, scoring 1 goal and 5 assists in 10 games against the Blues and Hawks. He was banged around like a rag doll for both series' and never quit his drive. Even Vigneault was singing his praises after Game 1 against the Hawks, saying that with the cut on Woody's head and the missing tooth that he spat out that he now looked like a real hockey player.

Wellwood was a great story this year, as far as evolution of an NHL player goes. I'd re-sign this guy in a heartbeat, however I'd watch his guts over the summertime to make sure they don't protrude over his belt.

Congrats to Kyle on his season.