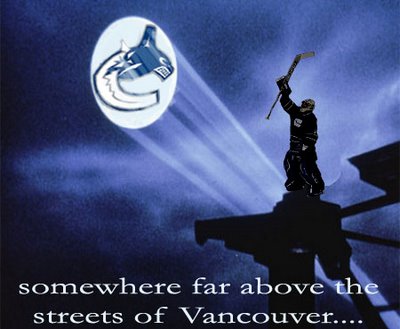 Enemy Territory: A Queen Among Kings/Battle of California

Update: Via the LA Times, the Kings will have a handful of rookies out there tonight who will are aiming for a spot in the bigs next season, including:

After playing and beating a playoff-bound team in Calgary, the Canucks now go back to playing 2 non-playoff teams to finish the year, and the fans will wonder if they bring their A-game against weaker opponents. The grand theft larceny of the Flames bolsters my confidence in the ability of Roberto Luongo, but not the team defence. The Canucks know they have to tighten up, but aren't getting it done. Sure, Luongo loves all those shots because it gets him into the game, but it won't make the team successful in the playoffs long term. There isn't much time left.

The Kings are not going to roll over though.

"We talked about finishing out the year strong,"Kings' defenseman Matt Greene said. "We're just trying to make sure we have some good compete out there and are playing hard.

"We're going for points here, we're not going to lay down for anybody. Just another game for us."

The Kings rank 13th in the NHL on the power play and 6th killing penalties. Special teams aren't everything are they? The Canucks rank 17th and 15th respectively.

It appears the Kings will go with Jonathan Quick in net. Their forwards lines should look like this:

More on the Kings here.

As posted in the Fan Posts section, the Canucks will not make any changes to their 6 defencemen, with Rick Bowness saying that nearly all the skaters need to play better defensively. Man, do they ever. Where has the stingy Canucks defence gone?

Mats Sundin looked a lot better against the Flames. Let's see if he can continue that effort. To me he still looks a bit lost out there at times. I think a big reason for that (beyond the rust) is because our system is so much different than what he played in Toronto. For whatever reason, Sundin would be given the puck to charge up the ice more in Toronto. Here he seems to dump the puck in and wait behind the net (or in that vicinity) for someone to give it to him. There's a lot less movement from him. But it seems to be improving. Emphasis on "seems".

Personally, I'm anticipating a big night from the RPM Line. Kesler has been frustrated as hell lately. It's time.

It's also time to bury a team that will be golfing in a week.