This could be it. If the Canucks lose to the Flames (in regulation) the Northwest Division title is lost

Share All sharing options for: This could be it. If the Canucks lose to the Flames (in regulation) the Northwest Division title is lost 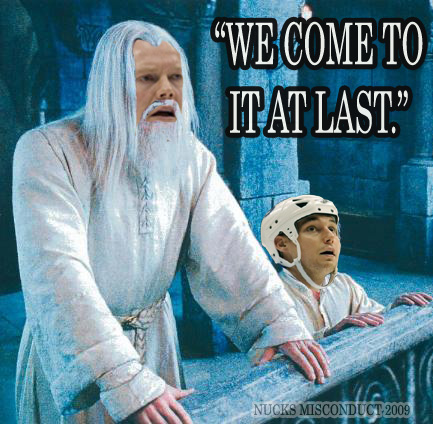 The Enemy: Matchsticks and Gasoline

UPDATE: Zanstorm calls it: Blackout is in, Hansen is out. Luongo is equating the atmosphere to the Chicago game. So expect someone to slash him in the face and the ensuing line brawl to begin midway through the third.

UPDATE: Bruce Dowbiggin of the Calgary Herald is somewhat stirring the pot in an article today:

Demitra gets his share of flak lately--as does gaffe-prone defenceman Alex Edler. But the buck stops with No. 1 in Vancouver's net. How he shows up tonight will go a long way to deciding if Vancouver starts the playoffs at home or in a hostile venue such as Chicago. Either way, he'll be sure to hear about it from Canuck Nation, a group that Valium was made for.

Hat tip to Tank Hankerous at the CDC Forum

The Calgary Flames disposed of the Kings rather handily last night to put themselves in a tremendous spot to win the Division. Now, if they defeat the Canucks tonight in regulation the crown is theirs. The Canucks could not tie Calgary after that. Not even if they win their last 2 games and Calgary loses theirs. The Flames would still hold the edge in wins and the party would be over.

That no-show against Colorado really stings now. Vancouver is going to have to put aside whatever it is that's eating away at them and find their game back. Basically, do the opposite of what they did against Colorado.

Do they have it in them, or are they going to limp their way into the playoffs?

I know, I'm getting ahead of myself, but I'm just stressing the importance of it. If the Canucks fail tonight we move on to a different race: the race for 4th spot .

I'm not going to say much else except that I hope Alain Vigneault doesn't mess with the lines too much. The RPM Line must stay in tact. I think Hordichuk should draw in and Hansen should sit, as he has decent chemistry with Rypien. The Unemployment Line must consist of Wellwood-Bernier-Raymond. Just my 2 cents, and think I'm right, as the team came to life a bit after AV re-assembled them last game.