No Shelter If You're Looking For Shade: Conference Semi-Finals, Game One

Share All sharing options for: No Shelter If You're Looking For Shade: Conference Semi-Finals, Game One 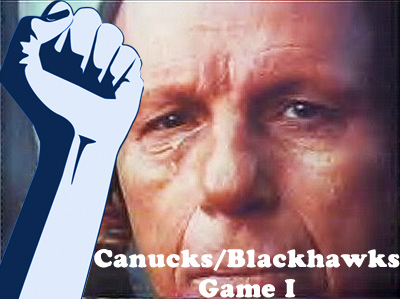 Nine days waiting for playoff hockey to begin again has been torture. It actually gave me time to do work. Not fun work either, like real work work. That's no good. I even cleaned my apartment one night. This free time is appalling! I miss the mindless midweek drinking, the blog banter, the screaming at my TV, scaring the dog by flailing my arms about...and so on...

So it's with a Province of happy faces (and some displaced ones as well) we get to kick start the second round of the playoffs tonight. On one side, the good guys, well rested after dispatching St. Louis and welcoming the eyes of an entire nation (OK, some of them) who would very much like the Cup to return somewhere north of Detroit.

On the other end we welcome Chicago, the folks we were supposed to play in the first round (or so everyone said). Full of kids, a russian gangster goalie and a giant f'ing Q behind the bench, all of whom are drunk on their first round defeat of Calgary and ready to see what more then can get.

I said it in the first round and I'll say it again now: if you have a friend who doesn't "get" hockey, sit him or her in front of the TV tonight and watch a fan be born. These two teams don't like each other and have plenty of guys who can back up their collective angst.

Layoffs be damned, Vancouver needs to set the pace at home quickly tonight. It's just a single game, but messages will be sent and lines will be drawn. For the Canucks the message needs to be one of discipline; keep their emotions in check, their sticks down (Mats!) and play your game. Take it shift by shift and minute by minute. Leave it all out there like we know you can. The rest will take care of itself.

A wise man once said:

I couldn't have said it any better.

Here's your game thread for the first game of the second round. You know what to do.

Note: We'll be changing it up tonight and welcoming Second City Hockey over for the first period. We'll then take a road trip over to their site for the second and then the third is here, there or wherever you'd like. Best to do this now before the teams get too entrenched in this and we end up all hating each other. 'tis all in good fun. So be polite to the visiting 312'ers (but hide the good china just to be safe).