Canucks can stick a fork in the Oilers' playoff chances

Share All sharing options for: Canucks can stick a fork in the Oilers' playoff chances 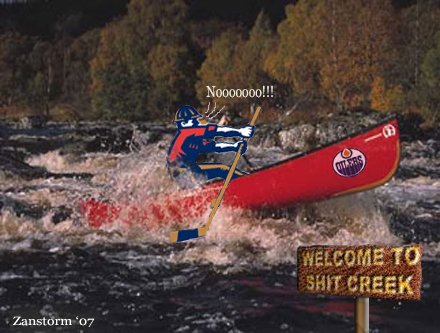 In case you didn't know this, it's Roberto Luongo's birthday today. He turned 30.

The Wild beat up on the Flames 4-0 tonight and the Hawks beat the Preds. The Canucks can put themselves in the driver's seat now with a win over the Oilers. I get this feeling that if we don't win the Northwest we won't have home ice advantage in the playoffs, as it looks like Chicago is going to continue their torrid pace.

The Oilers currently sit in 11th spot in the Western Conference, 4 points out of 8th spot. Already their chances of getting in are slim to none, especially when you consider that the 8th place Blues are 7-2-1 in their last 10 and the 7th place Ducks are 8-2-0 in their last 10 games.

Oilers' GM Kevin Lowe addressed the media after Edmonton's 2-1 loss to the Sharks last night basically expressing his (and owner Darryl Katz's) disdain for the Oilers' media, who are calling for a change in management, especially Craig MacTavish's head on a platter. Management is not changing anything at this time of the season and are hoping the Oilers can rally by winning out their final games for a chance to squeak into a playoff spot.

I would appreciate if if the Oilers would just roll over and give up as the Canucks come for a visit but that is not very likely. They will remain a pain in the ass to play against as they have a tendency to do at this time of the year...every year. Just look at last night's loss to the Sharks: they outshot San Jose and barely lost that game. That was the Sharks.

Reports out of Canucks' practice on Friday were that Alain Vigneault had shuffled his lines, putting Pavol Demitra on the 3rd line with Kyle Wellwood and Steve Bernier and Mason Raymond with Mats Sundin and Ryan Kesler. Speculation is that AV was not happy with the RPM line's defensive play. Neither was I, actually. Terrible.

But has Demitra been all that bad? I thought Sundin was a bigger defensive liabilty than Demitra. I suppose it helps that Sundin is a natural center and Demitra isn't, so Demitra would get the demotion. Yet, it is not a lock that AV will go with those lines against the Oilers.

How will the Canucks respond emotionally, not only after clinching a playoff spot in a shootout loss to the Ducks, but also with the tragic events surrounding their buddy Taylor Pyatt?