Share All sharing options for: Cody Hodgson Leads Battalions to the OHL Finals 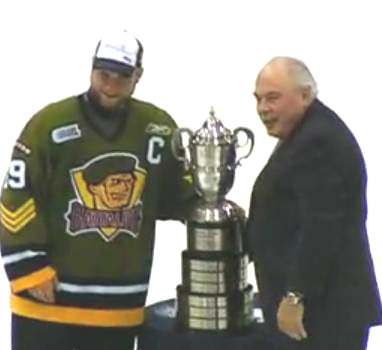 This is the first time the Brampton Battalions have ever been to the OHL Finals, where they will face the Windsor Spitfires. Cody Hodgson is tied for top spot in playoff scoring with 9 goals and 27 points in 16 games. He shares the lead with Spitfires' Taylor Hall and Ryan Ellis.

Hodgson scored 2 goals and added an assist in a 7-4 beating of the Belleville Bulls.

Hodgson's teammate Matt Duchene is the only player of the top 3 ranked (Tavares and Hedman) who is still playing in the playoffs. His 13 goals leads all players and is a new Battalion record. He is garnering a lot of attention these days, and moving up in the ranks.

But back to Hodgson. He keeps giving Canucks fans more and more reasons to get excited about our future. These experiences of course are going to add to the abundant character which he already possesses.

Here is some footage of the end of the game along with Hodgson accepting the trophy.