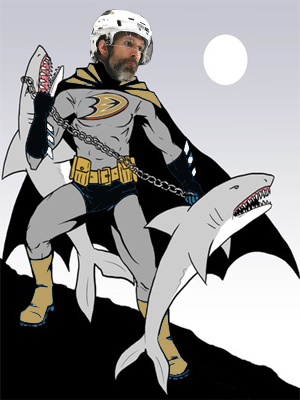 I know, it's too early to assume things, as the Sharks-Ducks series is not officially over yet. But did you watch Game 4 tonight? That was a disgrace! The Sharks looked like slugs and showed no determination. The Ducks are eating them up.

Fear The Fin summed the game up perfectly: PATHETIC. Sharks fans are disillusioned and for good reason. Joe Thornton continues his floating ways. If you thought Sundin was bad at times you need to watch Joe. Terrible. Captain Marleau wasn't much better. The team is flat and all but dead, except for maybe Dan Boyle.

I've been watching the Flames-Blackhawks series, but now I will be watching it very closely. Know your enemy. If the Ducks take the Sharks out, the Canucks will keep home ice advantage. Isn't that a beautiful thing?

The Canucks know it.

"No, I'll never be a Ducks fan,"said Dan Sedin. "But I would love for them to beat San Jose. It will be interesting to see how they do. I mean, if the Ducks can beat San Jose, we get home-ice advantage again, so that would be really good for us," Daniel further explained. "The way we've been playing at home, it would be big."

More on that at the Vancouver Sun.

Some people sound like The Rock when it comes to the Canucks' next opponent. "It doesn't matter!" they say.

I'm not quite that optimistic, even though I perhaps should be.

Think of it this way: a series against the Flames would be another bone-crunching series. There would be a lot less of that against the Blackhawks (except for hair-pulling). I prefer a less physical series in the sense that we saw what started happening to Canucks players like Sundin, Salo, Mitchell, etc against the Blues. At the same time, a divisional war would sure as hell be fun to watch. Stay tuned...