A Statement To Be Made: Game Four Thread

Share All sharing options for: A Statement To Be Made: Game Four Thread 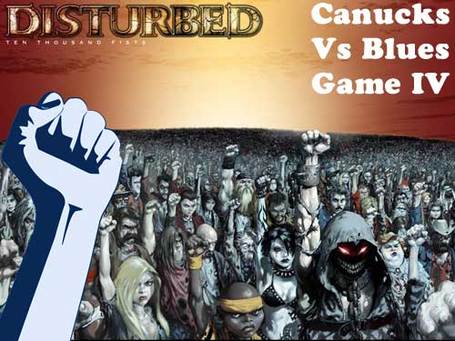 Most of the time when I bring up Disturbed, they get scoffed at. I don't really know why; maybe it's because it's hard to classify them into one musical genre. Or maybe it's because their singer, Dave Draiman, often throws in noises that sound like he's been stabbed in the crotch with a flaming pitchfork. I don't know; to each their own.

But they are another band with an element of melodious anger that's distinctly theirs. That's why they make my iPod rotation and, this morning, a verse jumped out at me in "Perfect Insanity":

Branded like an animal
I can still feel the burn in my mind
I do believe that you’ve made your message clear
Deprivating, isolating, all that I feel

I know, you wish you had this upbeat, sunny song playing at your wedding. That's what happens when you let the little lady pick the tunes friend.

Point being I think that's what this series (which is less then a week old for god sakes) has come to. I said at the end of game three I don't think many people could have predicted Vancouver would have this lead. And now that they have it, they've turned St. Louis into that isolated animal backed into a corner. It's not just anger here; the Blues will be playing for pride.

All things considered, that should make them the most dangerous version of the Blues Vancouver has seen so far. If they go out in five games, they can claim value in the one victory on home ice when their back was against the wall. And you can scoff at that, but with a young team that's still learning, don't think that won't resonate.

For the Canucks too there is pride on the line in terms of a potential sweep. This is uncharted territory they're navigating towards: they have no players with Cup experience, their franchise certainly don't have a rich history of post season success and they absolutely never sweep teams. So they have their own lessons to be learned here. As their spring possibly lengthens and they have to deal with different opponents and who knows what other obstacles along the way, don't negate what the value of sweeping the hottest team in the league right out of the playoffs can do for their confidence.

A statement will be made tonight by someone. Simply by virtue of the "no tomorrow" fear, we should expect the Blues to pull out all the stops, although in a more disciplined manner (unless Crombeen really wants to help Vancouver again). The Canuck's game plan should be no different now then it was 48 hours ago: survive the intense first period, find your way to a one goal lead and fight through every minute and every shift that remains until the final buzzer.

This battle is close to complete, but there should be no celebrating until it's over; as the sagely Mr. Balboa once said, "I didn't hear no bell." Did you? 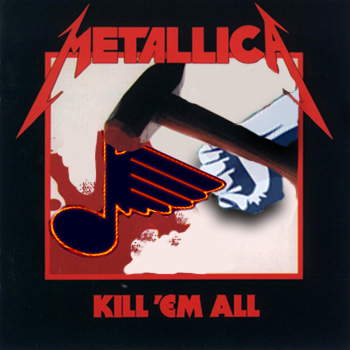 Just had to add it, Yankee. One of my fave albums of all time. Seems fitting:

-"Adrenaline starts to flow. Thrash the Blues around. Acting like Lee Stempniak...WHIPLASH!"

-"Vancouver is drawing nearer. On leather seats they ride. They come to take your life. Under the dead of night. Where the Luongod rides. So choose your fate and die! Oh yeah yeah!"