Share All sharing options for: Canucks a confident bunch heading into Game 4 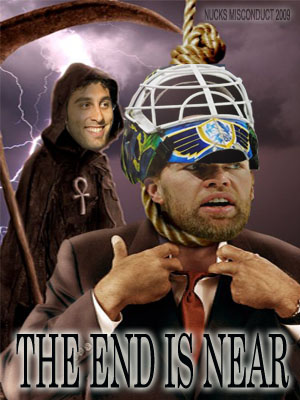 THE ENEMY WHO REFUSE TO QUIT: St. Louis Game Time

How can they not be confident? They've got about everything going for them right now. Game 3 was a colossal victory. They won in St. Louis by weathering a vicious physical storm in front of a rabid crowd in the first period and then settling down and taking over the game. Their special teams are rolling after killing two 5 on 3's and scoring 3 power play goals last game.

The Blues have known what they have to do to win games in this series but simply cannot get it it done effectively enough. They lack the consistent tenacity that the Canucks have brought. Chris Mason has not stolen a game and Roberto Luongo has.

Yes, this series could end tonight and much will be said about the above factors plus the experience factor. The Blues are a good team that are going to be great. The Canucks are a better team in almost every area on paper and are playing that way. They are built to win NOW.

"I think you start to see what's going on right now — the juggling of their lines and matchups," said Darcy Hordichuk. "Their guys who maybe were having success together, now aren't having that success. So they're trying other combos and they still can't find that success. It doesn't matter who they put against each line, we're finding a way to shut them down."

(Vancouver Sun). Follow that Sun link for more Canucks players' 2 cents. The confidence is flowing out of them right now.

Despite that, as a fan I am not going to get cocky. I'm not going to drop some broom references. Forget it. It's not over till it's over. I'm excited as hell, don't get me wrong, but I'll reserve the jumping up and down and gloating for when this series is over.

A sweep would be ideal. A break arguably won't hurt this bunch.

- Paul Kariya was practicing on defence with the team on Monday, has not yet been cleared by doctors to play, and admits his legs are fine but his hands are not. He is doubtful for Game 4.

-Naturally, frustration is mounting with the Blues team.

-Mats Sundin liked what he saw from the team in Game 3 and offered little details about his injury, calling himself day-to-day. I would say he won't play, if you've learned anything about Sundin lingo over the past year.

-Alain Vigneault on the Sedins:

"They (the Blues) think that being extra physical and sometimes even dirty on them, that's going to take away from their game," Canucks coach Alain Vigneault said. "The twins don't back down.

"To the contrary, that probably motivates them more to play harder and better, and that's what they've shown so far in this series."

Alright boys, let's get this over with! Finish them! Put them out of their damned misery!