Share All sharing options for: Vigneault tight-lipped about Sundin injury 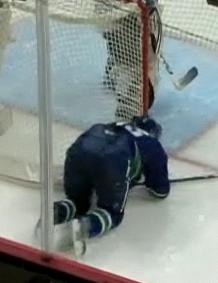 After Game 3 Alain Vigneault flashed that AV grin when asked about Sundin's injury. He would only say that Mats is day-to-day. Can't blame him for saying next-to-nothing about it. It's the way of the NHL nowadays, and it's smart. There is no use in giving out specific locations of injuries because opposing teams will target the area.

CBC had mentioned prior to the game that Sundin had practiced with the team so they didn't think the injury was all that serious.

Some wonder if it's his hip, and refered to Sundin's hip issues in the past. That was back in May of 2007. Sundin was angered back then that the medical information was leaked to the media (erhm...Steve Simmons Toronto Sun).

The report had the hip issue as degenerative but that was all but squashed in the following weeks. Sundin still had 76 points in 75 games that season and 78 points in 74 games last season.

The consensus now is that it's a minor groin injury. Sundin suffered one of those late last season and was "devastated", as he wanted to be an integral part of the Leafs late season playoff hunt.

It's pretty easy to begin speculating that Sundin has been struggling with his hip or groin since his return, as he has lost a fair percentage of his speed in his games as a Canuck. But he was improving as time went on. Was it rust or ailment? We may never know. I'll go with rust regardless.

Here is the clip of where it is believed Sundin injured himself. You can see him catch his leg on the net on his way around. Looks like a groin issue to me. He felt the pain on his way back up to his feet, but he did continue playing after that.

Ironically, in Sundin's first game missed the Canucks score 3 power play goals. Chance? I like how the Canucks showed a lot of character in Game 3 without the big Swede playing.

As much as I can appreciate Jannik Hansen's effort in his return, I would rather have Sundin playing, whether he's slowed or not. Gotta have that Sundin presence out there. He can strike at any time (like scoring the opening goal in Game 2 which turned out to be the winner). I'm completely confident that the Canucks can win without him, but they really need that 2nd line presence with Sundin there for long-term success.