Canucks are not letting up the Blues

Share All sharing options for: Canucks are not letting up the Blues 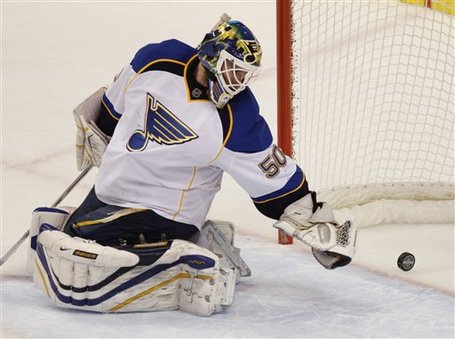 It's amazing to watch this Canucks team play like this. We had a hard time watching them "play down" to weaker opponents as the season wore on and I'm sure that bore question marks in our minds as to how these guys would play in the playoffs. Well, those questions have been answered. Vancouver is hardly letting up on the Blues at all. Where doubt would possibly enter our minds when being up by a goal or 2 after 2 periods in the regular season,  that simply is not the case now. It's the playoffs, baby, and this Canucks team means business!

This is where the inexperience of the Blues team is or may be coming into play. The Canucks are playing Alain Vigneault's rigid defensive system and Luongod is shutting the door whenever it fails. Roberto looks possessed, yet so does his teammates. The Blues look somewhat bewildered at what is happening.

We have bagged on Mats Sundin over and over again since I don't know when (probably 15 games ago when he scored his last goal) and Mats scores the game-winner tonight, bloodsack under his left eye and all. Then the Sedins and Burrows contribute on the final 2 goals. More on the Sedins' genius from Mirtle here.

The Unemployment Line of Wellwood-Bernier-Raymond was tremendous tonight but still couldn't get on the scoresheet. I had no idea that Woody was so tough. The Blues were pushing him around a lot in the first 2 periods yet he persisted. I wish these guys would get rewarded with a goal...and they might just get it if they keep this up.

Bottom line now is that the Canucks will have to keep up this kind of effort in St. Louis. Ideally, they need to terminate the Blues and move on. This series is the best of the bunch by far. It's so physical, however, that it has to be taking a toll on our beloved Canucks. In my opinion, they should just get it over with and rest up for the next series. The way they are playing right now, this series may not even go 5 or 6 games. Is Luongo in the Blues' heads yet? He has only allowed 2 goals in his last 5 games!

Like I said, the Blues are bewildered. They may now need Paul Kariya to enter the fray for some kind of momentum, because their hot streak going into the playoffs is all but toast.