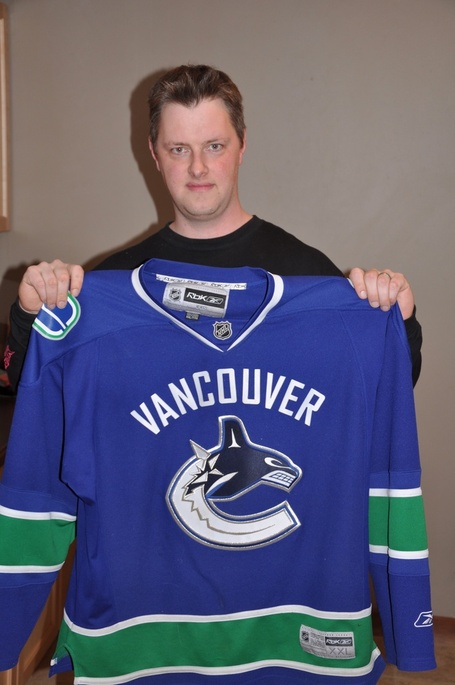 *NOTE FROM ZANY: THE DEADLINE FOR ENTRIES IS 7:00 PM WHEN THE PUCK DROPS FOR GAME 1. THANKS FOR ALL YOUR ENTRIES SO FAR AND GOOD LUCK!*

Since I bought a Willie Mitchell jersey last Friday an idea popped in my head to hold a contest on this site where someone could win my (pictured) Canucks home jersey with no player name on it. Yes, I'll wash it before I send it.

Rather than make the stipulations too general where more than one winner could occur, I came up with one different idea:

Pick the amount of goals that the Canucks team will score in the playoffs this year. You only get one guess. The closest to the actual amount gets the jersey. In the event that one person guesses within 3 goals under and another 3 over, the tie-breaker will be the closest guesser without going over wins. Look at other people's numbers before you post. Every guess has to be different.

I'm going to throw in a guess as well for the hell of it, so you had better beat me or I'll keep it.