Trap trap trap (The quest for one point)

Share All sharing options for: Trap trap trap (The quest for one point) 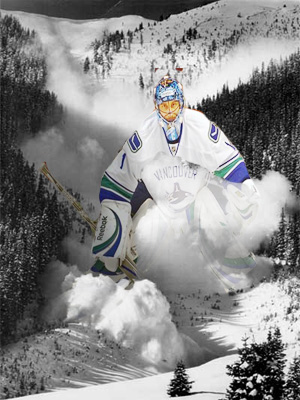 No Joe Sakic. No Marek Svatos either who is done like dinner after taking a shot to the hand (finger) from his teammate John-Michael Liles earlier in the week. Per Ledin will play in his 2nd NHL game in his stead.

The injury-riddled Avalanche have had 11 players make their NHL debuts. Only the league-worst New York Islanders have had more players (12) play their first NHL game in 2008-09.

There are some who are concerned that Luongo may be putting his groin in jeopardy by playing an early game because he injured his groin against Pittsburgh in an early game last time. Well don't tell Roberto that. He knows what's at stake and he's going to play, damn it!

Editor's note: GoodKeith posted this in the FanPost section and I figured it summed up the preview of the Canucks' game against the Avalanche very well.

This is what it comes down to, Canucks fans: A noon-time date with destiny. Or, even, a lunch date with a real ugly chick. One chance to seize the northwest division once and for all after the Flames had their "insurmountable division lead," the first chance the Canucks had to clinch (CANUCKS AN INCH AWAY FROM CLI... nope), the game the flames had a chance to clinch (Where I still don't know how Roberto made some of those saves), and now we're here.

It's been a long season that began with a somber note and has hopes of ending with the greatest gift of all: Home ice. (Well, for the first round at least) A season which saw Roberto Luongo miss time with a non-contact injury only to see him come roaring back, answering the critics and asserting himself into the captain's seat.

A year of lutefisk, blue and yellow, ABBA and Mamma Mia.

And now, all the Canucks and their rabid fans need is one point against the Colorado Avalanche. Just get to overtime and you've got your title.

Destiny is something few can control. Don't lose your grasp on this, Canucks.

I live and work in the state of Washington and today, while working an eight-hour shift, I saw more people in Canucks logowear than in Seattle Mariners clothing.

They know something special's about to happen. Tomorrow begins the first step.