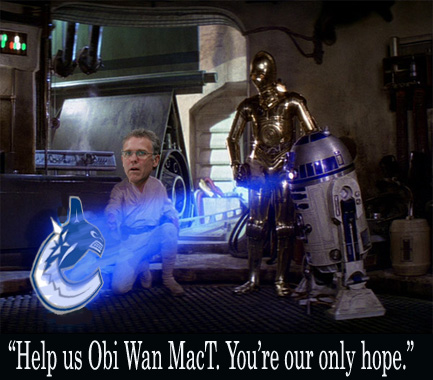 It has come down to Canucks fans doing the unthinkable and cheer for the Oilers in their last two games against the Flames. You put aside your built-in hatred for the enemy from Edmonton and perhaps bring yourself to get giddy whenever they score a goal.

In your mind you:

- apologize to Zack Stortini for calling him an ape, an asshat, a mindless tit, etc

- want Craig MacTavish to become Coach of the Year in the span of two games.

- become religious, as you pray not only for an Oilers win, but for someone to take out Kiprusoff's knee(s)

- believe that Jeff Deslauriers is going to play like Billy Ranford in 1990.

- promise the Oilers that the Canucks will go easy on them next year; that Alex Burrows won't pull anyone's hair; that Luongo will let a soft Hemsky shot go through his five-hole to allow him to break out of an impending slump; that Shane O'Brien will score at least 1 goal on his own net against them next season; that Rypien won't beat an Oilers within an inch of his life.....

You gotta love sports. One minute you hate the enemy and before you know it you're asking them for favors. Let's hope the Oilers play for the sake of pride. We know they don't care about doing us any favors, nor should they.