In praise of Willie Mitchell

Share All sharing options for: In praise of Willie Mitchell 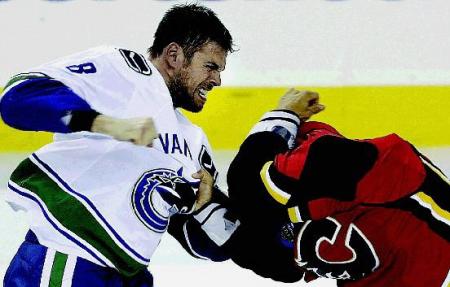 Beantown Canuck had mentioned some stats about Willie Mitchell that I just wanted to share with you, as defensive defencemen don't always get the proper recognition.

BC-boy Mitchell has not missed a game all season.

He is a +31, which is 6th best in the NHL and 2nd best amongst defencemen. Only Boston's d-man Dennis Wideman has more (+32). Willie could actually surpass Wideman yet.

In the 76 games Mitchell has played this season he has only been a minus in a game 17 times. In the lousy month of January, big Willie was a minus player in 3 games out of 12. That's it.

His 3 goals and 22 points are easily a career high.

Mitchell averages about 25:00 played per game and is reliable enough that Alain Vigneault can put him up against any team's top line.

Who could forget the extended stick he used in practice to Mike Keenan?

Mitchell has 1 more year left on his contract. He is making $3.5 million and is worth every penny. No, he won't put up the points, which is what most people look at in the stats categories, but Mitchell (most of the time) quietly plays his uber-effective style of defence and is a goalie's best friend. I believe he is our unsung hero.

I have heard Wild fans on more than one occasion say that he is really missed in Minnesota. And that, along with the stats above are a testament to how great Mitchell really is and has become.

-Mitchell saves the day in the playoffs against Dallas.

-Wanna see guts personified? Mitchell blocks a shot with his face and his leg on one shift.

-Willie's first goal as a Canuck.