Share All sharing options for: Kings/Canucks: Don't Anger The Mothers 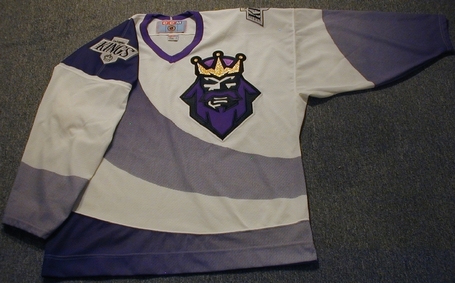 (Say what you will about Vancouver's past jerseys, but this thing is puke-tastic)

With over three quarters of the season in the books, keep in mind this Vancouver gang has only one person with more than 20 goals (Daniel) and two with more than 30 assists (Sedins). In fact Daniel's team-leading 62 points doesn't even crack the top 20 scorers in the league. Their lone All-Star is only 10th best in both GAA and S%. As a team, they are third most penalized in the league, sport the sixth worst penalty kill and make up for that by having a mediocre power play.

So how the hell do you explain a 13-3-3 run, capped off with a convincing win over the best team in the league? Mr. Willes if you please.

This edition, at least as they're playing now, has a nice balance between its defence and its offence. They can still trap it up when they have to but their attack is so much more dangerous and their skill level is so much higher...

...it's the sum of the parts which is noteworthy.

I can't emphasize that last sentence enough. You could probably point to three things to explain the run if you really wanted to: the Burrows "bump" on the first line, the Kesler spark on the second and the return of Luongo. There's some underlying arguments that could be made too, chiefly the emergence of some blueline support (Bieksa and Salo),a transformed third line or just the fact we have Sundin. Maybe that Vigneault has stopped the frequency of line juggling? Pick your favorite.

Fact is they're not relying on the Sedins or Luongo for the win every game. Fact is they're getting production distributed across the top three lines and the defense. Fact is someone different gets to play hero every night.

And the fact is - thanks to our good friends in Atlanta and Colorado on Sunday - the Canucks can move within three points of Chicago and six of Calgary with a win against the Kings tonight.

No reason to take the foot off the gas now.

The Kings are going to absolutely suck playing in a few seasons, maybe as soon as the next one. With a glut of first rounders gelling together - and led by the likes of Frovlov, Brown and Kopitar - this team is slowing becoming what I think their fans have been waiting for since, what, the mid 90's?

If only they had a goalie (right about here is your Cloutier joke opening) though Quick is sure to be the one they've been looking for. It makes you want to put in LaBarbera tonight just so he can shut down his old team.

The Kings are five points out of the 8th spot so they're theoretically in it but have a tough fight ahead of them. However with one goal losses to Detroit and Columbus in their last five - and two straight wins over Dallas and Minnesota - they're certainly giving it their all.

Don't expect a cakewalk; these are precisely the types of games against desperate opponents that scare me the most. If the Canucks take the Kings too lightly, expect Vigneault and their mothers to put a boot up their collective asses.

- The Kings lines will probably look a little like this:

Purcell is a rookie call up who just is riding a four game point streak. And Calder is still in the NHL? That's adorable.

- In case you missed it (like me), Ohlund's assist in the San Jose game ties him with Lumme and Kearns for the franchise record for points by a defenseman. With 18 games left, he's a virtual lock to take it.

- During its current four-game win streak, Vancouver has had eight different players score and have outscored opponents 12-5; they're averaging 3.43 goals since the start of February.

- Want a walk down memory lane? Burrows had his first career hat trick against the Kings in March three years ago. Just sayin'.

- Lastly, I used to live in Los Angeles so I am the rare NY'er who actually likes it. I also got to see first hand it's where good musical intentions go to die a prepackaged, groupthink, money-first death. Sometimes this process has hilarious consequences, case in point: Vanilla Ice and MC Hammer on the same stage. Sweet merciful crap.