Can The Moose Boys Help On Defense?

Share All sharing options for: Can The Moose Boys Help On Defense? 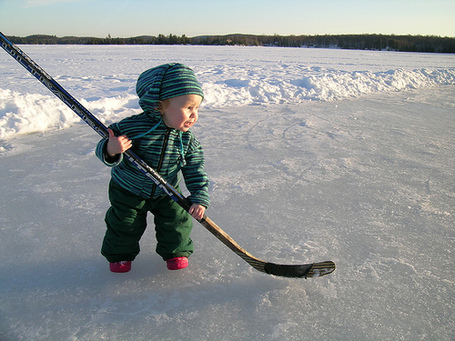 This picture is so repulsively cute I want to knock my own teeth out.

Anyway, yesterday we looked at the forward ranks, so why not the blueline now? I trust you're cool if I ignore taking a peek at the Moose goalies right? (Hint: you've already seen two of them as Canucks already and one of you out there actually designed his mask)

I use the phrase "case of the Sami Salos" quite often and for good reason. Everyone knows how brittle the poor guy is (christ look at this, I'm surprised TSN's software doesn't crack compiling that list of boo boos). Don't get me wrong; when he's healthy, he's a decent defenseman who has the best point shot on the team bar none. But he is the polar opposite of durable and, as such, you have to ask what happens if he (or anyone else on the blue line) takes a licking and stops ticking.

With Nycholat tucked safely away in Calgary Colorado, Davison and Vaananen have the 7th and 8th slots nailed down. For the sake of argument let's take a look at some of the blueline help that can come from Manitoba (and once again it's been Puck Bunnied for your enjoyment)

McIver, the once-a-Canuck-we-waived-who-went-to-Anaheim-only-to-return-in-a-trade-for-Mike-Brown, has 18 career games under his belt for the Canucks but didn't register a point in any of them (note: the stats above are his Duck days) and, worse yet, sported an ugly -11 through them. Projected as a #6 or #7 guy, McIver has no points in 11 games with the Moose this year, but is a +3 with 18 PIM's. He's a band-aid solution at best, but one that brings a great deal of grit as well. Vancouver wasn't happy losing him to begin with, so the reacquisition suggests the organization wants him to stick around and develop here.

...and speaking of grit we have Fitzy, the current leader of the Moose in PIMs with 159 loving minutes in the box. Fitzgerald played one game last year and, if you blinked, that means you missed this. Another #6 or #7 projection, he's a big guy who plays a rough game (and, as you'll guess, all the cons that come with that). However, in a physical first round series against opponents taking liberties with Luongo?

Old faces in new places. Did you know Baumer has been at the NHL/AHL level since 1995 and not one team played him more than 9 games in a season other than Vancouver who chucked 70 games at him in 2005-06? He's not known for being terribly physical, but he does have a good shot and would be handy on the PP (in his lone Vancouver year, 22 of his 34 points were on the man advantage on top of one shorty!). On the Moose he's 8th in points (8-19), but he was brought back in a reserve role and, while the Canucks haven't needed it yet, he'd probably be the no brainer call up in case of injury.

Heshka was acquired by the team back in 2006 but has never been called up to play. He had a break through year for the Moose last season and has followed that up with a a decent one (3-20) this year but, honestly, the top four on defense would need to be tommy gunned for him to be called up, particurly in the post season. But the big Heshka secret as you can see in the profile? He's invisible and, quite possibly, standing right behind you.

Again I left some souls out of this, notably Patrick Coulombe who is currently with the Victoria Salmon Kings and Taylor Ellington who's with the Everett Silvertips. Also Kiril Koltsov who I've made into a personal punching bag for my own editorial purposes for years. Anyone who's ever stepped near an EA Sports hockey game knows that Koltsov is a surprisingly reliable plugin at defense, but in reality, he and the organization must hate each other. If not, and he can reign supreme over in the KHL he can damn well jolly lace 'em up over here too...oooohhhhh right, sorry I forgot, the Canucks hate Russians.