The Hair Pull Heard 'Round The World

Share All sharing options for: The Hair Pull Heard 'Round The World 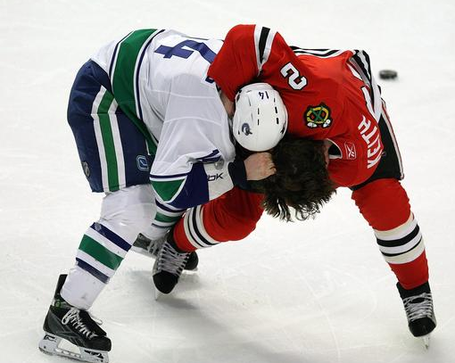 The Canadian feed of the brawl last night only showed Burrows/Keith once during the entire melee (focusing instead on Eager and Bieksa) and that was when they were already down on the ice. So I really had no idea that Burrows pulled anyone's hair until our friends at Second City Hockey let us know about it.

It didn't take long for the CDC, fueled by callers into the Team 1040 on the post game show, to start thinking about the possibility of a suspension. Puck Daddy jumped on it as well.

Today, courtesy of Kukla, there were some comments from the Hawks side of the fence about it.

"That's not something I've ever had happen to me," Keith said. "My little sister never even pulled my hair when I was a kid. It's kind of comical when you have a grown man trying to pull your hair on the ice."

The league likely will take a look at the incident and Burrows could be suspended.

"I don't know what the ruling is," Keith said. "I don't know if the league reviews that or not. It's pretty blatant he was pulling my hair."

The pulling of hair is prohibited and normally would draw a match penalty. However, none of the officials on the ice saw it as they were tending to ther other fights on the ice.

"I think it's silly," Hawks forward Adam Burish said. "There's no spot for that. I think that's stupid the way he was pulling [Keith's] hair. Especially a nice haircut like Duncan has. I didn't see it at the time [but] I'm sure I would have been more mad than I was already."

I hope most Canuck fans can be objective enough to see that Burrows resorting to the actions of an irked 8 year old girl isn't what we've come to expect of him, especially considering his stellar season so far. Burrows may be a pest at heart, but I can't imagine he did this purposely (especially considering he's been in far worse altercations before and hasn't acted like that). I'd wager he got caught up in the moment, maybe Keith had him locked up pretty good and he went blindly with his instincts. Who knows, we can all guess.

But it's possible (probable?) the league will look at it and could still suspend him. It would absolutely suck to lose him just as we're close to over taking Calgary for the division and he's fueling that first line with the Sedins.

However, if a suspension happens, I would support it; if that was a Blackhawk pulling Kesler down by his hockey fro, we'd be a tad annoyed as well. Sounds like a wonderful way to get severely injured that doesn't involve Steve Ott acting like a moron (again).