Share All sharing options for: The Return of Buttercup: Canucks/Wild Game Thread 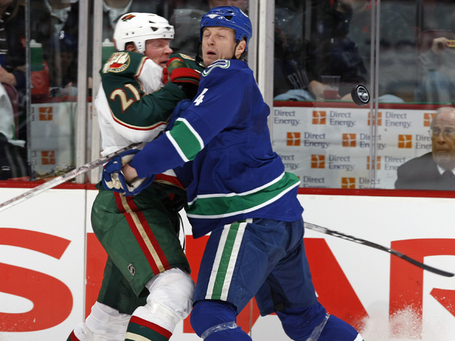 There was a time not too long ago that the players rarely left the ice of a Wild/Canucks game without scars, a trip to the IR or misconducts, dating clear back to Vancouver's epic playoff meltdown in 2003. Darby Hendrickson and Cliff Ronning against Dan Cloutier anyone?

But this season something feels lacking. Even after last year's Ohlund kneecap whack on Koivu and Boogaard's Pinky and the Brain jab against the Sedins, the venom just seems toned down a bit. Maybe it's because Demo is a Canuck, Rolston is a Devil, Bertuzzi is a Flame, Jovo is a dog, Clouter is in a van down by the river, Cooke is a Penguin, Ruutu is a Sen and Gaborik has become a colossal management nightmare.

But never fear folks because Cal Clutterbuck is here to make you remember what hating an opposition player is truly all about.

In a way you have to hand it to ol' Cal. At 21 and standing a modest 5'10'', he is leading the NHL in hits (not sure if he still is honestly) and is on pace to break the NHL record for hits in a single season (311 held by Dustin Brown). You have to admire a young guy going apeshit in his attempt to stick with the squad and do his best by his teammates. It even spawned a short-lived, yet still asinine Calder campaign for the guy. Adorable!

The last time these two teams met - a game in which the Wild won in OT - Cal got himself tossed for boarding Burrows. Cal said afterwards:

"Burrows embellished it considerably...It's done and over with now. You've got to expect that from a guy like that; I should have known that going in, that it was him and that if I were to hit him in that spot, he might embellish a little bit.

"My hands were down. Maybe a boarding call, but he saw me coming the whole time, so ..."

"It's over and done with," Clutterbuck said, " and his time will come."

"His time will come?" Shades of May/Bertuzzi right there. But I guess that's what you'd expect from a guy who offers little else other than hitting. I know the Hockey Wilderness guys think it was embellished, but if that was, say, O'Brien running Pierre-Marc Bouchard against the boards from behind....hmmm.

But hey, since this is our first official NW Battle in our new digs here at SB Nation, we can let bygones be bygones. Let's focus on the here and now: since their last meeting, Burrows has completely elevated his game and earned a spot with the Sedins on the first line (hell maybe we owe Cal for waking him up). The numbers for the two BFF's since the last time these teams met:

And the team records since their last face to face:

Make no mistake though, this should be the same old dog fight we've come to expect when these two teams clash; this is a Lemaire team after all and they don't go down easily (that's what she said). The Wild sport the 10th best PP and the league's best PK (remember the good old days when that slot used to be Vancouver's? They're 21st by the way). Backstrom is the real deal, ranking fourth best in the league in both GAA and S%. Get used to hearing this: tonight's match-up better feel like a playoff game.

The Wild walk into GM Place the losers of two straight and rumors of a trade deadline selloff (at least in Gaborik's respect). On the other end, Vancouver is coming off a dominating performance and has Luongo back to prime time status. With wins by Anaheim and Vancouver tonight the Canucks can move within spitting distance of Chicago and fourth place. The Wild are just hoping to to make it to the 8th slot, but with Edmonton and Nashville playing each other, can only hold to keep pace with a bubble group that also includes Dallas, St. Louis and Anaheim.

So dream the impossible dream Cal. Maybe you can break Brown's record in the end because it's probably the only thing your team will "win" all year.

But don't worry about "the time coming" for Burrows, it already has. Yours may come soon as well, in the form of two words: Rick Rypien. Enjoy!

- Gaborik hopes to be back by "the end of month". What a team-first guy!

- New guy Ossi Vaananen will not dress for Tuesday’s game.

- Nolan has missed three games with a broken toe and Brunette has an injured knee, but both expect to play tonight.

- Henrik Sedin is one goal away from #100 for his career.