Share All sharing options for: A gutsy consistent effort by the Canucks in their 4-0 win over Chicago 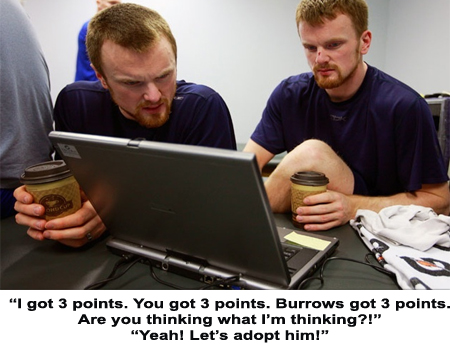 One Hawks fan who was at the game tonight was quite upset:

I’ve never seen so many Canadian players try to mount the Blackhawks during the game.

I pretty much had the worst experience ever at a hockey game. I had two cock bag Canuck fans in front of me that were cheering uncontrollably every single time Luongo touched the fucking puck. I’ve never wanted to punch someone in the face as much as I did tonight. I had to chug a beer just to calm myself down.

There are so many angles that I could approach that comment, but I won't.

It must have been frustrating on all fronts for the Hawks and their fans tonight:

-the Hawks had several chances early on utilizing their speed and on the early power play chances Vancouver gave them, but they were either stymied by a precise Luongo or missed the net.

-the Canucks took an early 1-0 lead and never looked back.

-the Sedins-Burrows line dominated (9 points for the 3 combined)

-the Blackhawks' frustration grew increasingly until Dustin Byfuglien gave Luongo a jab after a flubbed opportunity and a line brawl broke out.

-it's fair to say Hawks fans hate Burrows after that hair-pulling incident.

I hate Burish and Eager just because they exist. I hate Martin Havlat because he's so damned good. He looked like he was going to tear us apart tonight, but faded as the game went on.

-Kevin Bieksa played a sickeningly great game tonight. He was not only stealing the puck from Hawks in his zone repeatedly, but he also stood up / took one for his goalie / team in the brawl.

"Boys will be boys" said Vigneault post game, not biting on any reporter attempts to get him to speak ill of the Hawks.

-this would make an excellent playoff series, but I'd still prefer the Canucks to catch the Flames. They are 1 point away once again.

Check out a Blackhawks postgame perspective at Second City Hockey. Those guys and girls over there are cool and were fun to hang with online during the game.