Share All sharing options for: Canucks-Blackhawks preview: Blowout or Classic? 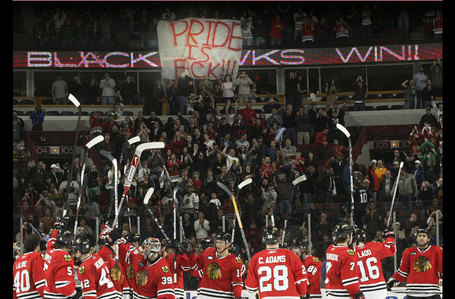 KNOW YOUR ENEMY, AND HECKLE THEM: Second City Hockey

On any other night or at any other time I am a Hawks fan, and have been since the Tony Esposito days. But not now. Not with so much at stake. Not with home ice advantage or the Northwest Division crown dangling in front of us.

No, the Hawks need to be pounded into the ice tonight and the Canucks need to make yet another statement or two:

- that they can be or are a better team than Chicago

- that they can start a game strong and hand the opposing team their own ass at a more consistent level.

If the Canucks put out an effort like they just did in Colorado this could get ugly. It's just that I don't see that happening. This will be the best team (on paper and in the standings) that the Canucks have faced since the Sharks way back on March 7...a win by the way.

Since then Vancouver has played 10 straight games against non-playoff teams, with the Ducks being an outside exception. In these games a disturbing trend is apparent, and you all know what I'm going to say, right? The Canucks play down to their level and don't bring that "I'm going to beat your sorry ass" work ethic consistently game to game.

It's the only serious pooper I have with the squad. That and they just can't seem to catch Calgary even though they've had their fair share of chances.

A LOOK AT THE HAWKS

I'm telling you, the Hawks aren't slowing down. That's 3 straight wins since Patrick Sharp has returned. In those wins:

- Martin Havlat has 4 goals and 3 assists. He is known as Jesus Havlat Christ at Second City Hockey. I'd agree with that statement if Havlat could turn my glass of water into a Spiced Rum and Coke.

- Patrick Sharp has 2 goals and 2 assists

- Jon Toews and Brent Seabrook have 1 goal and 2 assists each.

- 2 of these wins came against the Sharks and the Devils.

- The Bulin Wall played in goal for all 3 wins.

I probably shouldn't say this, but the Hawks are better than the Canucks in almost every statistical team category. See for yourself here at NHL.com.

This game should have a playoff-type of feel to it and could be a preview of Round 1 of the playoffs. I can't wait.

Go get 'em Canucks! The rest of you, put some booze in your bloodstream and hang on for the ride!