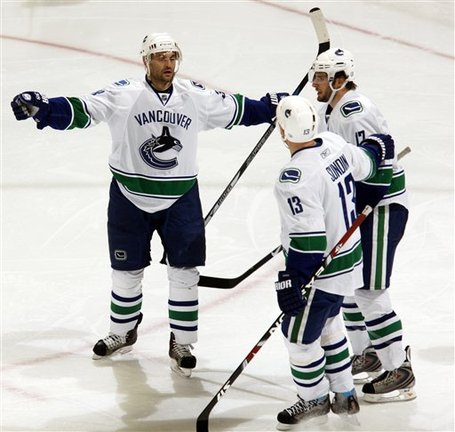 When I say "a little" I mean it literally. The Canucks took about 30 minutes to show some passion. Up to that point Jason Labarbera was keeping them in it and it was only 1-0 Avalanche. But right about the time where Ian Laperriere shot a broken stick towards the puck, told the referees where to go and how to get there and then ejected was when the Canucks came alive.

Demitra missed the ensuing penalty shot as Andrew Raycroft stoned him silly, but the Canucks got the much needed tying goal from Hank Sedin just over 2:00 later and never looked back. Hell, they outshot the Avs 16-5 in the 2nd period! Raycroft was good.

In the 3rd the surging Canucks scored 3 unanswered goals to bury the stunned Avalanche to pull within 1 point of the Flames.

In my opinion it's becoming painfully clear that Vancouver is going to have to take the Northwest Division crown in order to have home ice advantage in the playoffs. The Blackhawks won their 3rd straight game tonight (this time beating the Devils) to put them 2 points ahead of us. I really don't think they are going to slow down. Is Marty Havlat rolling or what? 3 more points for him tonight. We'll see how well we match up against them on Sunday.

But Vancouver had better play more consistently against Chicago than they did tonight.

Great to see Jason Labarbera get the win. I thought defensively (except for a few odd-man rushes against) the team played well in front of him.

Nice pass by Sundin to Demitra for that beauty goal in the 3rd.

Demitra was playing "angry" tonight, according to the Province.

"I was not very happy with my game," Demitra said of his play against St. Louis. "I don't even know what (Vigneault) said but I was pissed. Trust me, I was pissed. I put my game face on and I was ready for a good game. "I was so pissed with myself, I couldn't even sleep (Thursday) night."

I didn't think Demitra was playing all that bad lately. He has been showing the type of grit that maybe Sundin should learn from. Sure, Demo scored his first goal in 11 games tonight, but he's also had 8 assists in that span. Sundin had 2 goals and 3 assists in those 11 games. Not that stellar. Apparently he was called out by AV as well.

"We need to be a complement to the Sedin line," Sundin said. "That means we have to do what we did (Friday) on a consistent basis. We're good enough to do that.

"We talked about something before (Friday's) game. One of the problems against St. Louis was there were only two or three shifts where we controlled the play down low and really ground them out. Because all three of us are big enough and strong enough to control the puck. We need to use that more."