Rick Rypien is skating with the Canucks again and the coaching staff is saying it's up to him when he feels he's ready to play again. Also, there is a chance that Jannik Hansen could make his return tonight. My question about these scenarios is: Why mess with the team right now? How about both guys sit until there is an injury or losing situation? 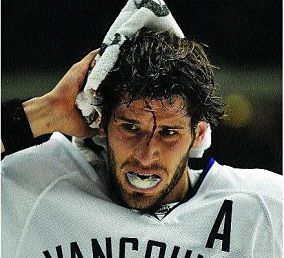 After opening the scoring in Texas two nights ago, he took a Jere Lehtinen skate through the back of his helmet which then proceeded to remove a few inches of skin from his skull. Did Kesler bitch and moan? No, he went in, got stitched up, came back out and scored again. Canucks win and Dallas (as God has ordained many a time) loses.

I'd like to remind you of this the next time you hear about a MLB pitcher getting pulled because of a hangnail.

The larger point being we've seen the Canucks win quite a few different ways this season but few, if any at all, came through as many errant high sticks, lost teeth, gnarled skulls and frequent trainer visits to the ice to mop up the blood as it did in Dallas. Much to Don Cherry's dismay, a team loaded with Scandinavians showed their spine and won a gutsy one.

Gillis built his team with a good deal of brawn but we haven't seen it flexed too often, especially since the dark days of January. It was good to see it serve them well in a win. With ten games to go until the real season begins, these types of games will be more frequent.

I doubt they'll need much of it tonight though because, unlike Dallas, the Blues have a realistic chance at the playoffs.

I said yesterday that I want the Blues in the post season. I reserve my true hatred for those teams that have wronged Vancouver in the past and Edmonton and Anaheim fit that bill perfectly. Kick their sorry carcasses out! Mason alone is playing out of his mind (17-7-5 with a 2.00 GAA,.927 save % and four shutouts since Jan. 19) to help get them in there.

However, with Calgary shitting the bed again and Chicago beating San Jose (what?!), we need these points as well. A win tonight points Vancouver one point back of Calgary for the division lead which is impressive considering they were 11 points back a few weeks ago.

So for the final time this regular season we make the Blues enemy #1. For St. Louis tonight likely starts a run that will determine if they even have a post season or not. After Vancouver, they play a home & home with Columbus (during which we'll all be honorary Blues fans), then against Chicago (honorary Blues fans again) and ending with a game against Detroit (for the SLGT crowd, I believe I call them 'Fuck Detroit' for accuracy).

With the post season in the balance, the Blues should be the epitome of desperate tonight (or, as they said of Nero in the Matrix, they are beginning to believe). I don't suspect that belief/desperation with present itself like it did in Dallas with an abundance of clipping and high stick penalties but, hey, maybe I'm wrong.

More than likely though will be that Vancouver's job, yet again, should be not to take their opponent lightly. If the Canucks play their type of game without creating a standing room only problem in their penalty box, they'll get the two points. If they start taking lazy penalties and give too much TOI to the likes of Boyes, Backes, Perron, Berglund or the neck that holds McDonald's head they'll pay for it.

If I were Vigneault I'd have the O'Brien own goal on a loop playing in the dressing room for the next two weeks to reinforce the fact that for every commanding victory the Canucks roll out out they can still, from the dark recesses of their collective asses, pull out a turd dense and dark enough to capture and absorb light.

There, now that we have the requisite rectum comment out of the way, let's check the stats:

- Despite Mason's stellar play of late, he's allowed eight goals in two starts against Vancouver this year and 0-4-1 with a 3.37 GAA in seven career games.

- The Blues are 22-2-2 this season when entering the third period with the lead. They are, however, only 15-23-5 when failing to score first. So, yeah, there's a gameplan in them numbers.

And, speaking of losing teeth, your fun fact of the day from ye 'ole Canucks report:

On This day in 1997: Gino Odjick passes his previous record and Canucks record of 370 penalty minutes in a single season (1992.93) by recording his 371st penalty minute (fighting) in a game versus the Anaheim Mighty Ducks. Odjick’s 371 penalty minutes makes him the NHL’s most penalized player during the 1996.97 season.

I think that deserves some Gino versus the entire Blues organization video love. Enjoy.