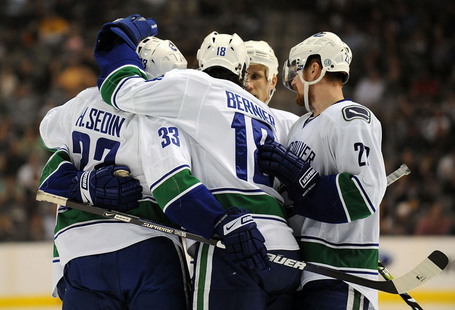 "It was nothing," Henrik Sedin said with a straight face. "He's not a baby."

That is what Hank said of his brother after he took a high stick to the chops and then scored the winning goal moments later.

What a game. It had all the intensity of a playoff match. In the end the Stars looked like deer staring into headlights before sudden impact as the Canucks steamrolled them 5-2. A big plus in this game was not only the play of Roberto Luongo to stop the first shot, but also his teammates making sure there were no rebounds and clearing the puck out.

The Stars had plenty of shots though: 37 to the Canucks' 22 to be exact. But the Canucks scored 3 consecutive powerplay goals to bury the demons from Dallas. Those goals killed the Stars' early momentum and allowed the Canucks to take over the game.

"They have a good power play," he said. "But we made them look awfully good."

-Isn't that a great thing about Luongo? He goes under scrutiny for his comments on After Hours on Saturday and then responds with one hell of a game like this.

-It was a statement game for the Canucks and my gad, did they ever make statement..in Dallas where they have not had a lot of success, as was mentioned in the pre game post.

- Steve Ott is one hell of a shit disturber. It was good to see the Canucks not taking any crap from him. He's one of those guys you hate to death but if he played FOR your team you'd love him.

- The Canucks move into 4th with the win (or do they? They've played 1 less game than the Hawks I believe, 9 points up on 9th place Nashville, and 4 points up on 6th place Columbus.

-Defending Big D is searching for answers, and apparently has found them.

- Hordichuk's hit on Turco after Ott hit Pyatt low. Classic. Hey, was that a 2-hander to the back of Hordichuk's head by Trevor Daley afterwards? Punkass.

-Sundin's presence on the team is helping Kesler. Yes it is.

- No, the sky is NOT falling, god dammit.