Donuts. Is there anything they can't do?

Share All sharing options for: Donuts. Is there anything they can't do? 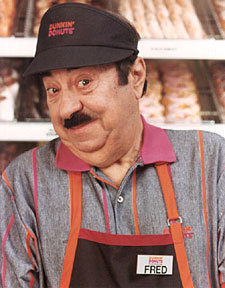 With about 50 plus hours to go until the deadline (not that I'm counting), it helps to look back at the colossal fail that was last year's deadline for Vancouver. Granted, the team was sputtering for so many reasons that a Hossa here or a Campbell there may not have saved them, but tossing one third liner for another, in part, ultimately cost Donuts his comfy gig and did nothing to help this team's post season bid.

So as we wait and scour wire services for anything resembling a noteworthy trade, just remember that Vancouver now has one too many defensemen and far too many slumping forwards. Add in a tight playoff race, the pending contract issues with the Sedins, Ohlund and Burrows and the shot in the dark that was the Mats Sundin acquisition and it paints a picture of a team that will do something. Like it or not, you're staring at a Canucks team built to win now and this is the last chance they have at adding a missing piece.

We can only hope that, come tomorrow, that something isn't another a Pettinger-level move. We'd be better recalling half of Manitoba if that's the best that's left out there once the tradeline dust settles.

Also, you still have time to get your ideas in for our deadline contest. Own up.

Some other morning news and notes:

- O'Brien's comment to the ref after his fight with Dorsett last night, "Just hold me up for a second and let me catch my breath."

- It's a shame he's going to leave because Ohlund is now one point shy of tying the franchise record for points by a defenseman (321) currently shared by both Jyrki Lumme and Dennis Kearns.

- Speaking of Ohlund, the HG went on record as saying Mats had the black plague. He set up Kesler's goal a few seconds later (which is totally fine because I do that before every Salo goal).

- A Vancouver win tomorrow night and a Chicago loss would pull the Canucks within five points of fourth place and six points of Calgary (and obviously a Vancouver win will continue to keep the Wild out of the playoffs all together...joy of joys!).

- Tell your mom: net-banging is funny.

- And finally - mining the depths of the CDC for your amusement - comes a question about the third star of last night's game: Is Johnson Bionic?