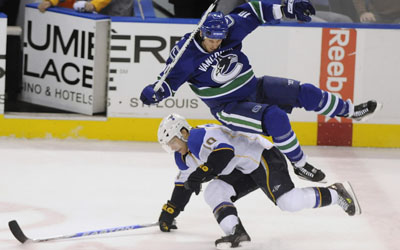 Pavol Demitra is doubtful for tonight's game with a knee injury. Head coach Alain Vigneault says he came in this morning and his left knee was swollen. X-rays were negative.Demo is a game time decision.

Take a guess at who hurt Demo's knee last game....right, Steve Ott. Bastard. Demitra has 5 points in his last 4 games. He's been playing very well. If he sits, my guess is Taylor Pyatt gets promoted to the Sundin-Kesler line, Raymond makes the jump to line 2, as those guys were in on that sick 4-man goal, and Jannik Hansen finally draws in.

These types of games I can't stand since bubble teams are scary as hell in the middle of March.

The Canucks will put their franchise best 10 game win streak at home on the line against the Blues tonight, who they also play next Thursday over in their barn to close out the series.

Ideally these guys haven't forgot last week since the Kings and Ducks showed them just how those fighting for the final slots do it.

With St. Louis only two points out of the 8th slot, expect some hell. But with a win, Vancity will finally move a point past Chicago and into home ice advantage territory and also remain just three back from Calgary. Beautiful.

- Odd: Willie Mitchell has the most points against the Blues this season (2-2-4).

- On the other side, Patrik Berglund leads all Blues players with five points (1-4-5) against Vancouver.

- Vancouver is 24-2-2 when scoring four-or-more goals in a game. Their last three wins have been 4-2 scores.

- The Blues third best scorer is David Perron; for those keeping track at home, the 19 year old was selected one spot after the Canucks took Patrick White in the 2007 draft.

- Check out the Oshie love over at St. Louis Game Time for some views from the opposition. Seriously the Blues have awesome hockey names, including Carlo Colaiacovo, Jeff Woywitka and B.J. Crombeen.

- I could be mistaken, but since Sean and I kicked the doors open on this site in the beginning of February the team has gone 15-3-1. You're welcome.